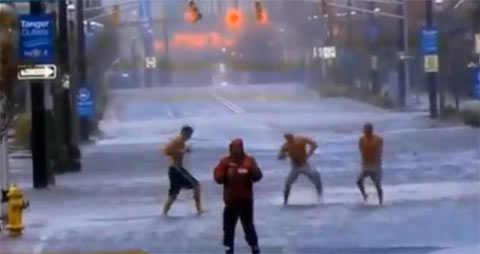 During Hurricane Sandy on Monday, several men thought it would be a funny prank to dance around in shorts as a CNN reporter covered the storm. The dancing started off with one man who was later joined by other men all dancing topless in the storm.

The men in the video can be seen standing in the street in Atlantic City, New Jersey behind the reporter who is advising everyone to stay in their homes warning people that they shouldn’t be on the streets.

“… One hour from now they want everybody who doesn’t have a reason to be outside to be inside their home,” stated the reporter during a Live CNN broadcast.

The advisory came as the roads were becoming over-washed.

It seemed the reporter didn’t know, at first, that the men were enjoying themselves behind him, but he stated it when a view of the Ocean washing upon the street came on the television screen.

“That’s the Ocean behind me, we actually got a bunch guys playing around in it as you can see, not the Ocean, that’s intersection. The Ocean is about a three quarter of a mile behind… these guys are enjoying themselves, they got about 55 minutes to enjoy themselves because the police is going to come and clear everybody out, ” explained the reporter.

You can say the CNN reporter handled it well and the model-like men got their moment of shine.