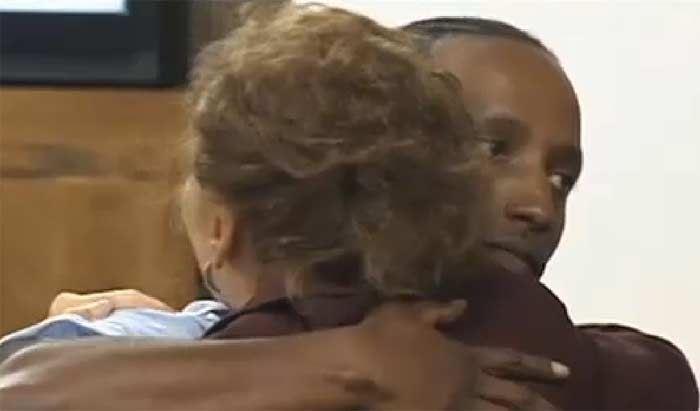 A Shelby County jail inmate has been honored by the mayor after saving a woman’s life following her near fatal car crash in Memphis.

Tyteaddis Johnson, who is serving 3 years for aggravated burglary, was honored by Shelby County Mayor Mark Luttrell for saving the life of Margaret Dobbs.

Margaret Dobbs was involved in a car accident that sparked a chain reaction that forced her car into another vehicle.

Dobbs found herself upside down when her car flipped over as she was trapped inside of her seat.

Following the accident that occurred on Airways Blvd near the Memphis International Airport, Johnson, who was nearby doing work detail, ran to the rescue cutting Dobbs from the vehicle with lawn tools and stayed with her until medical help arrived.

To say the least, Dobbs is extremely thankful for Johnson saving her life, taking a risk of his own, endangering himself as well as risking further trouble for being an inmate leaving his work detail.

Johnson, on the flip side, was not concerned with getting in trouble and says he was brought up by his grandmother to deal with consequences if he is forced to do the right thing.

Watch the video of the story of the unlikely hero, a Shelby County inmate, honored for saving the life of a stranger.