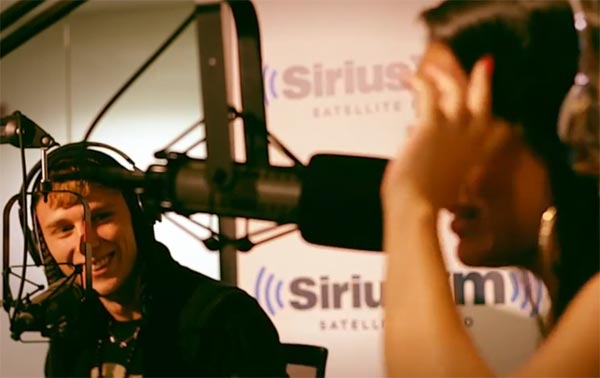 During an interview, Bad Boy Records artist Machine Gun Kelly revealed why he belongs in the list of top 5 rappers. The ‘wild boy’ rapper gives his insight.

In an interview with DJ Green Lantern and Boss Lady on Invasion Radio, Machine Gun Kelly, who’s working on his latest project “Black Flag,” stated that he feels like he’s being denied in the class of hip-hop. The hip-hop artist may feel this way after being denied stage presence at the Coachella Valley Music and Arts Annual Festival.

The rapper goes on to say, you can’t tell his fans that there is a better rapper than Machine Gun Kelly.

“Hands down, there’s no way I’m not in the top 5,” says Machine Gun Kelly as Boss Lady follows behind him with, “Of the current class.”

According to Machine Gun Kelly, it doesn’t make sense.

Watch the interview for yourself.

Machine Gun Kelly: “There’s No Way I’m Not In The Top 5 Rappers Today”

During a promo run for his new mixtape Black Flag, Machine Gun Kelly opens up to DJ Green Lantern and Boss Lady on Invasion Radio about maturing as an artist and not being given the respect he feels he deserves as an emcee (“I feel like I’m denied access to even being in the ‘class’ of hip-hop”).