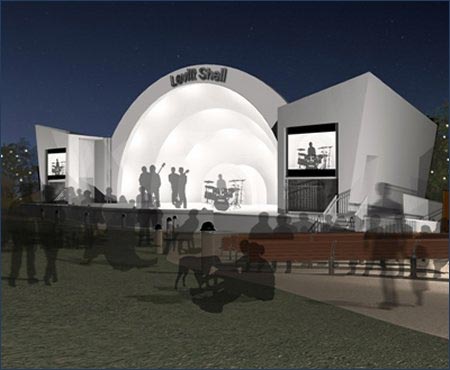 Levitt Shell at Overton Park (formerly Overton Park Shell) which the city closed a few years ago after years of inactivity and disrepair has since had a $1.3 million dollar renovation and has begun it’s planned free concert season which began Thursday, September 4. Reportedly, the venue will be offering 50 free concerts a year within a variety of genres. The event which takes place from Thursday – Sunday started its first Thursday with a performance by country/jazz singer Amy LaVere (Roots) w/ Justin Townes Earle, moved on Friday with a performance by gospel, contemporary, and R&B saxophonist Kirk Whalum, Hispanic theatre group Teatro de La Rosa and a world of Salsa and Rumba with Melina Almodovar on Saturday, and ended the week with Afro-centric style dance group Watoto de Afrika on Sunday.

The Levitt Shell gained its name from Mortimer Levitt, the late businessman who built an empire of menswear stores around the country.

For a full listing of performances and concert schedule visit http://www.levittshell.org