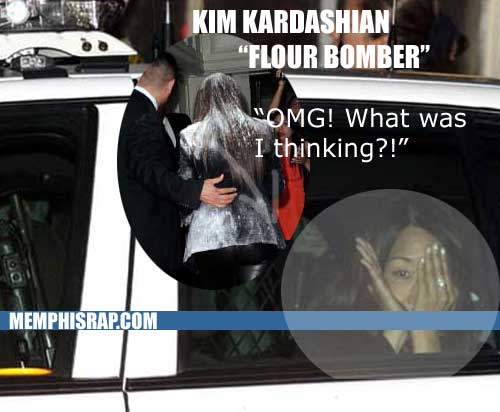 Kim Kardashian was assaulted with white powder on Thursday night after a female assailant threw white powder all over her, prompting the fire department to come out to investigate.

Kim was on the red carpet out at London Hotel in West Hollywood in promotion of her new fragrance line, True Reflection.

While walking the red carpet, a woman from a distance threw the white powder at Kardashian showering the reality TV star and personality with it, in her hair, over her head, and body.

Kim was taken to a private room where she was examined, brushed off and later returned to the event.

The white powder was later determined to be “cooking flour.”

The woman, who was detained by police after the incident, was set free because Kim initially decided not to press charges, though later reports reveal she may now press charges against her ‘flour bombing’ assailant ‘because it is not acceptable.’