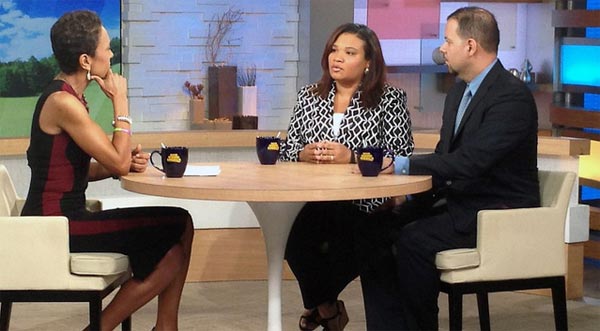 One George Zimmerman juror who is considered to have been the only minority during the trial is coming forth to apologize to Trayvon Martin’s family over the acquittal of George Zimmerman and speaks in an interview to the world on national TV about the case.

The juror using the name “Maddy” joined ABC’s Robin Roberts in an exclusive special revealing face to speak about how some of the jurors distanced themselves from her which included herself and five white females.

According to Maddy, she had no choice but to say that Zimmerman was not guilty due to how the law was read to her which stated that if you have no proof that a person killed someone intentionally the person is not guilty. Known as juror B29, she only followed Florida’s law and the evidence presented.

The 36 year-old Puerto Rican mother of eight from Chicago says she has been battling with herself since the verdict and stated that she has been questioning herself on whether she did the right thing.

Maddy says she would have made the entire jury hung and fought endlessly.

Meanwhile, Maddy says she commends Trayvon Martin’s parents for continuing to fight for justice as this is what she would do also as a parents and she is sorry as she feels like she let them down.

Neighborhood watchman, George Zimmerman, was found not guilty in the killing Trayvon Martin after he followed the teen and confronted him for being in the gated neighborhood Martin’s father belonged to.

Tonight a special on ABC World news with Diane Sawyer and Nightline will air portions of Maddy’s interview and will be followed by the full interview on Good Morning America on Friday.