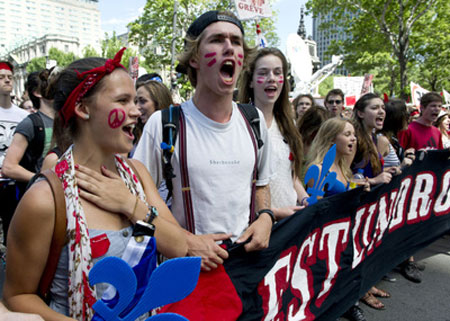 Hundreds of students began interrupting one of the most watched Formula One GP weekends in the world by walking the streets naked. A number of naked students walked in Montreal yesterday and have begun interrupting the annual Montreal Grand Prix/Canadian Grand Prix auto race in protest against the plan to increase the cost of tuition. The protest turned into a battle zone when some of the protesters got angry as police officers approached them.

To break up protesters the police decided to use stun grenades, truncheons and used pepper spray on the crowd.

Students state that have gotten naked to show the government they are transparent during their demand for them to freeze tuition fees, to gain more media attention for their cause and to prevent police from handling rough.

According to reports, tuition is looking to increase by $1,720 USD (1,778 CAD) per year which is a lot for a working student or a student with limited funding.

This isn’t the first protest for the students in Canada, the students have been protesting for months against the proposed tuition hike and since their demonstrations have been downsizing in people many decided to go naked while negotiations are stalling.

Reportedly some protestors tried to crash a party on Crescent Street which is associated with this weekend’s Canadian Grand Prix as well as a Formula One cocktail reception and an event at the L’Arsenal art complex.

Many of the protestors are believed to have been with the Black Block, which carries black umbrellas over their heads and all black clothing to keep helicopters from filming them and to prevent them from identifying them in photographs during their anti-police brutality demo.

In the end, 39 people were arrested and police decided to tighten up on the streets and closed down several to keep the protesters at bay.

Wonder if this would work if people got a bunch of co-workers together and protested for higher pay at jobs. What do you think?