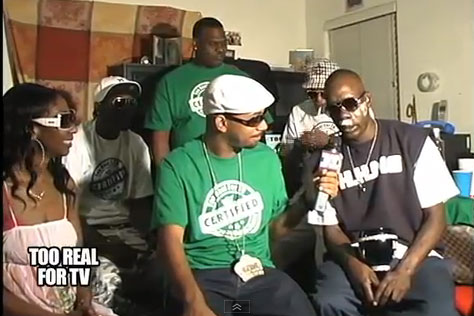 The rapper, who left Three 6 Mafia in 2006, was shot multiple times, including in the face and leg.

In a recent interview with Too Real for TV, a bandaged Crunchy Black was seemingly very positive about his unfortunate incident and was still very much focused on his music.

Crunchy revealed in the interview that he is working on a solo major label debut with Sony, which was part of the reason for his move to Las Vegas.

Crunchy says that there is no stopping him, and not even this tragic incident is going to sway him from bringing his Hard Hittaz to the forefront.

In fact, Crunchy Black, who recently released the mixtape Crunchy Black presents Hard Hittaz Money Gang: The Streets Need To Eat, which features the likes of Calio, Boogie Mane, Kevloc, 9Nine, amongst others, says the shooting has left him more motivated than even before.

Watch the interview with Crunchy Black just less than 2 days out of the hospital from the shooting to his face.