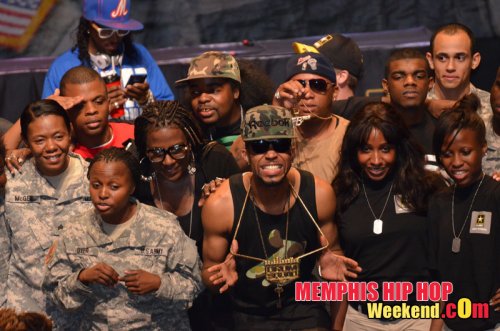 Over the Labor Day weekend, during the 2012 Memphis Hip Hop Weekend & Expo, multi-platinum music producer and artist Drumma Boy, who has been hard at work on new projects, was in Memphis for the U.S. Army What Makes You Strong Music Series held at the pre-show, where he debuted new music.

At the 2012 Memphis Hip Hop Expo pre-show, which was held at the Cannon Center for the Performing Arts in Downtown Memphis, TN, Drumma Boy debuted his new song entitled “An Army” featuring B-Hav during his FREE concert.

The pre-show, presented by the U.S. Army and sponsored by MemphisRap.com and Drumma Boy’s Drum Squad, featured prize giveaways, key speakers, information on the Army’s education benefits, scholarship opportunities and more than 150 career options including music, technology, and healthcare, plus featured the live performance and meet and greet with Drumma Boy himself and members and associates of the Drum Squad, including a stage appearance by Gangsta Boo and others, who all appeared on stage with Drumma along with the US Army officials, as seen in the pictures.

“The Army’s goal for the ‘What Makes You Strong’ tour is to present viable career options to multicultural communities across the nation,” stated John C. Myers, Director of Marketing, Army Marketing and Research Group via press release. “We are looking for the best and brightest young Americans to fill a wide range of leadership, high tech, science, engineering and educational careers available in today’s Army.”

Many people, may not realize that the U.S. Army is one of the nation’s largest providers of college scholarships, and in 2011 provided more than $230 million in ROTC scholarships, which included $100 million for HBCU students, according to the press released on the official Memphis Hip Hop Weekend & Expo site at www.memphishiphopweekend.com.

Drumma Boy’s track “An Army” was his salute to the U.S. Army, for their presentation of the FREE, family friendly community show and for the troops and their service to the country.

As seen in the video and pictures of the show, the Memphis native delivered an emotional, strong performance of “An Army.”

For more information on the What Makes You Strong event series, visit www.whatmakesyoustrong.com.