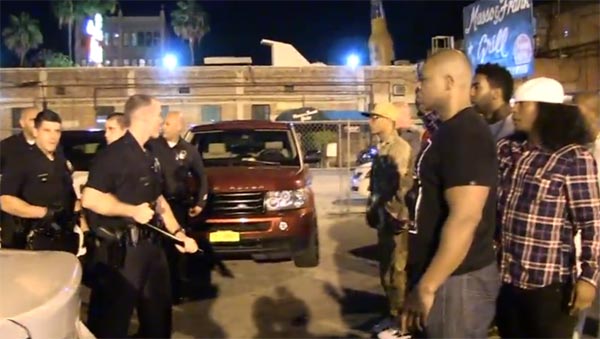 An intense police standoff with LAPD cops and rappers T.I. and The Game were caught on video tape following a fight or should we saw brawl at a club in Los Angeles.

In the video, which was captured by celebrity gossip site TMZ, two men can be seen being fiercely taken to the ground and beat bloody by what is believed to be security of the nightclub where the incident took place.

Apparently the guys were acquaintances of both T.I. and The Game that were denied entrance into the club called Supperclub.

After an argument, a punch is heard in the video, then members believed to be a part of club security are seen beating two guys down to the ground and then kicking them while on the ground as LAPD cops were present.

Not long after the two men were handcuffed after the beat-down, another video shows T.I. and The Game and their crew in a tense standoff with the LAPD who they first believed were responsible for their guys being beat-down.

It wasn’t until one of the men who were beat by the security told T.I. and The Game it was actually the security, that they then focused their anger towards the nightclub staff.

Watch the video of the incident between T.I., The Game, their crew, LAPD, security and off-duty cops in Los Angeles, California.