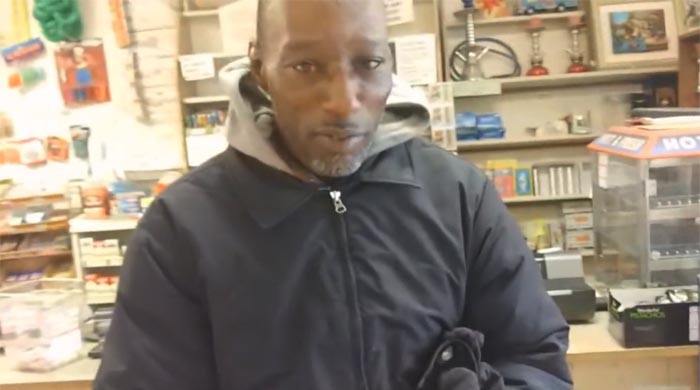 This video is evidently not for the weak at heart because you may need a box of Kleenex after seeing it. If you’re unfamiliar with a homeless guy named Eric who was pranked with a lottery ticket, then let us familiarize you.

Eric appeared on the viral video channel of Magic of Rahat’s, whose most known for pranking fast food restaurants at the drive-thru.

Video producer Magic of Rahat’s prank consisted of him giving Eric, the homeless guy, an alleged winning lottery ticket in which Eric was informed by Rahat that he didn’t know how much it was worth.

“I don’t have any money to give you, but I do have this winning lottery ticket. I really don’t know how much I won, I can give this to you,” Rahat told Eric.

To Eric’s surprise, the store clerk counted out $1,000 dollars and handed him the cash. What Eric did upon receiving the money shows you that there are people in the world who are not selfish with small unexpected fortunes.

Since releasing the video, everyone became inspired and wanted to join Magic of Rahat in doing something more spectacular to help Eric. The end result, they raised almost $40,000 to help Eric get back on his feet after initially looking to raise just $20k.

See the touching video for yourself.

Learn Magic at http://www.penguinmagic.com Vlogs on my 2nd channel: https://www.youtube.com/RahatsIphone Business Inquiries Only: Email: MagicofRahat@yahoo.com Twitter: http://twitter.com/magicofrahat Instagram: http://instagram.com/TheMagicofRahat Facebook: http://www.facebook.com/Magic-of-Rahat Second Channel: http://youtube.com/RahatsIphone . About Magic of Rahat What’s up! I’m Rahat, the Magical Prankster, and welcome to my channel. Every since I was a kid, I have always been curious and inspired by magic.