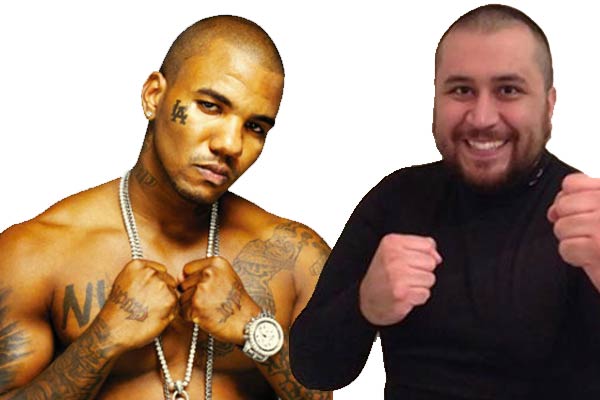 George Zimmerman is reportedly in talks of having a celebrity boxing match which may put him in the ring with a fight against a hip hop celebrity, possibly rapper The Game.

The Game came forward after possibly hearing talks of a boxing match with George Zimmerman and says he would beat the f*** out of Zimmerman if given the chance.

The Game says he would not be boxing for himself but rather for the “legacy of Trayvon Martin,” who the former neighborhood watchman George Zimmerman was found not guilty of killing in a claim of self-defense.

Reportedly, George Zimmerman believes The Game would be a good opponent but has his eyes set on Kanye West.

According to reports, Zimmerman wants to fight Kanye West badly because of Kanye reportedly attacking innocent people in past news reports.

In addition, another rapper has reportedly spoken up and wants a fight with George Zimmerman also — rapper DMX.

If a celebrity boxing match with George Zimmerman happens, the boxing match would be set to take place in Los Angeles, California, reportedly according to the promoters seeking to put the event together.