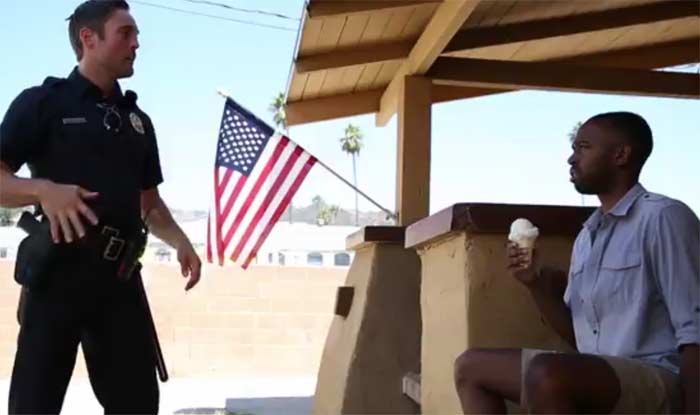 Comedy website Funny or Die has released a new video from its original video series – a parody entitled “Cop VS Black Guy” amidst the Ferguson shooting by a cop of young teen Michael Brown.

As he is enjoying his ice cream cone, the man is approached by a cop in uniform that questions why he is sitting in this private premise.

The man answers that it is his home and he is eating an ice cream cone that immediately infuriates the cop who now draws his weapon.

The cop calls for back-up as he details a possible robbery taking place and describes the man as “African American” and armed – referring to the man’s ice cream cone.

As the man responds to the cop absurd reaction, the cop suddenly switches from a regular uniformed officer with a handgun to fully armed SWAT with a sawed-off shotgun.

Before the video is up, the officer literally turns from SWAT to green beret in full ghillie gear to a stormtrooper.

Watch the video to see what happens.