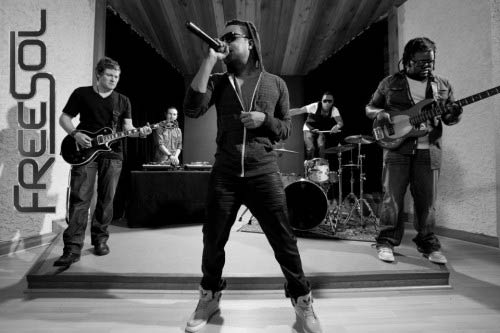 This past weekend I made it out to the Hard Rock on Beale to check out Free Sol. I actually had a really good time- it was great show with a decent crowd. It started out with Tetanus, a new rock band opening up for them. The band rocked out and also included two of the Free Sol members as well, Teddy on the drums and Elliott on the guitar. Next came Free Sol, who performs exactly like their name! A freedom of soulful expression. Also being from Memphis, they definitely have all the energy and style to grab this city’s attention! I sat down with Free (the MC) and got his take on where they started and where they are headed. Check out the interview:

How and when did Free Sol join together as a group?

Well in ’03 we performed and won the Mid-South Grammy Showcase at the New Daisy and it all started from there.

Who is in the group?

What makes you different from other groups in your genre?

We consider ourselves hip-hop and we’re different because we are a live band and we have a soulful/rock sound. Also lots of energy.

You’ve recently signed to Tennman Records (run by Justin Timberlake). Tell me a lil bit about that and how it has helped the group grow.

Well right now we are preparing to get in the studio with Justin now that he is off tour. We are also going to be more focused on our tracks. Expect big things.

How do you feel about the Memphis music scene?

A lot of artists such as Lord T & Eloise, Inner 61, and Rusty Lemon have great potential. We’ve always gotten lots of support and love from Memphis.

What should we be expecting from Free Sol in the future?

We are excited about getting out and performing again. And beginning April 14th, we’ll begin recording a new album with Justin, so we look forward to that

What would you like to say to your fans?

Thank you, Keep supporting, Be patient, and Keep an open mind.

You can check them out at http://www.myspace.com/freesol

Also more pics of the show at http://www.myspace.com/draprequest

“Music is the only thing I live for. God has given me a gift that I will use. The world will not always understand me, but I’ll keep on using my gift in the best way I know how. I have good days and I have bad days, I guess like any one who’s on a mission. But I am passionate, beyond anything else.