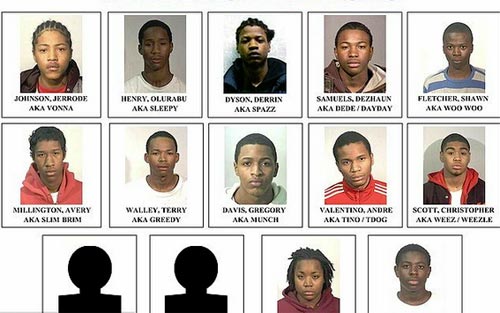 A New York street gang dubbed the Brower Park Gang aka Brower Boys was arrested after revealing and fighting over their criminal activities on Facebook, then ‘friending’ a ‘cop.’

This isn’t the first time Facebook has had a gang online, but this may just be in the top 10 of fails on the social network.

The gang openly posted their robberies, assaults and burglaries on the social network which resulted in not one, but fourteen of them getting arrested.

The gang which had been committing their crimes in the Brower Park area of Crown Heights for over a year got just a little too talkative and friendly on the social network site and approved a friend request from a detective. Yeah, an officer. That’s the reason Facebook says friend only the people you know.

On to the story… the gang known as the “Brower Boys” was indicted on 102-counts which was announced on Thursday by Kings County District Attorney Charles J. Hynes and New York City Police Commissioner Raymond W. Kelly.

The teens ages ranging from 13 to 19 were monitored by authorities, who saw the teens fighting on the social network over the laptops, computers, cellphones and other electronics that they had stolen from apartments by climbing up and down the building fire escapes and homes, which they later pawned. Luckily, most of the robberies that occurred happened when the owners weren’t at home.

Unfortunately, a few weren’t so lucky.

On one of the reported burglaries, someone was home at the apartment that was being robbed by four of the defendants, which included one of the 13-year-old gang members. The gang members tied up the victims and sexually assaulted a female. Allegedly, they threatened to kill the victims if they contacted the authorities.

In another robbery, an 18 year-old “Brower Boys” member shot the resident at the home he was robbing and allegedly ended up shooting himself while fighting with the victim of the home.

Det. Michael Rodriquez, who friended 7 of the boys, is being commended in the case for helping catch the gang members. And for those who are wondering what was Det. Rodriquez’ Facebook name, it is not being revealed in order to catch more of the criminals on Facebook.

To top it off, the gang members announced their upcoming heists which led to police catching them on surveillance for a few of those planned robberies.

“It’s break-in day on the avenue,” one of the posts is stated to have said.

One of the “Brower Boys” got upset about them revealing too much information on the social network and told them, “you all just gave yourself away.” Smart move, right?

Somewhere, someone, possibly even New York City Police Commissioner Raymond W. Kelly is having a laugh, and ironically the Brower Boys always signed off on Facebook with “LOL (laughing out loud).”