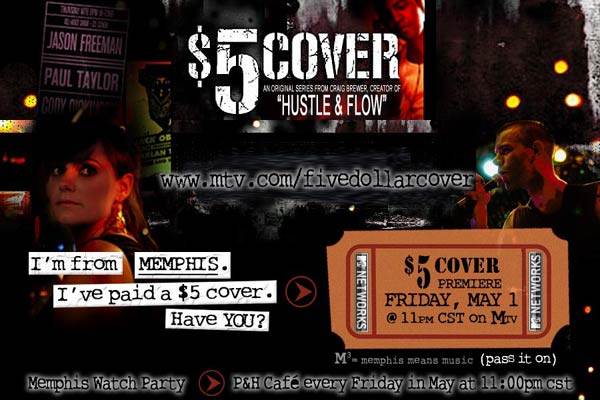 Tonight (May 1st), the Memphis Music scene goes online and on-air through Craig Brewer’s $5 Cover on MTV Networks. MTV, AT&T and Craig Brewer, director of the Academy Award winning movie “Hustle and Flow,” have announced that “$5 Cover,” the documentary series of the modern Memphis music scene, will premiere on TV on Friday, May 1 at 11PM CST.

In addition to the television premiere of Friday night’s episode, fans will also be able to access “$5 Cover” throughout the week va MTV online and via mobile content.

# AMTV – AT&T will host a full “AT&T $5 Cover Week” from 3 a.m. to 9 a.m., Mondays through Thursdays, that gives fans access to exclusive videos, interviews and short form segments.
# MTV2 – A “Memphis”-themed week beginning May 4 will include short form series episodes airing nightly for three weeks at 11 p.m., along with the documentaries, music videos, and more.
# mtvU – “$5 Cover”-themed programming, packaged music hours, interstitials, and other short form efforts will be featured, driving fivedollarcover.com.
# MTV.com and Fivedollarcover.com – Viewers can watch the content on demand, listen and download the music, learn about these artists and take a deeper dive into this fascinating scene.
# AT&T mobile phones – AT&T wireless customers will be able to access content from the series in the form of Cellular Video (CV) clips, ringtones and content available through their mobile Web browsers.
# MySpace – Exclusive content and promotion will be found on the $5 Cover community at www.myspace.com/fivedollarcover. Additionally, MySpace users may stream music from the series for free on the site. Each artist being featured in the program will utilize their official MySpace profiles to promote the show.

In addition to meeting the cast of Memphis artists and others on MTV, the network has also announced that it will be releasing a digital soundtrack of the individual artists’ tracks made for the $5 Cover series. The soundtrack, which will contain 15 songs, will feature Memphis rapper Al Kapone, singer Valerie June, Two Way Radio, Snowglobe, River City Tanlines, amongst others. In additionally, select songs will al;so be available as ringtones on AT&T phones.

Al is one of the originators of the Memphis underground rap explosion and a pioneer of the Dirty South Crunk/Buck style of Hip-Hop. He is a true performer and loves to work an audience. He mentors his son AJ, on the music game and records his flow between delivery jobs.

Valerie is a singer-songwriter, whose mysterious, melodic voice and eclectic, neo-hippie style transcends her down home southern charm and wholesome beauty. She lives in the same house as Amy, Clare and Wally and works at the local coffee bar, Java Cabana.

Southern songstress whose petite frame is smaller than the stand up bass she plays. Sassy and talented, her voice is innocent and bewitching. She is ambitious, but when she gets romantically involved with band mates, her expectations fall short, creating yet another sad song.

She is the garage-band poster girl – the drinking, dancing muse of all the rockers in Memphis. When Clare can’t find love she goes to extremes. She has been known to party too hard and go home with the guys in the band, putting her friendships in jeopardy.

Sexy as hell bad boy, and front man of Lucero. Ben is an old flame of Clare’s (amongst many others). He is constantly touring with his band, but is in town long enough to turn Clare’s world upside down. The kind of guy you wouldn’t bring home to mom, covered in tattoos, all the women swoon over him.

Sweet and sincere, Kate is a mother and musician. Her voice is angelic and evokes a world filled with cotton candy, bubblegum and carnivals. Her lyrics, sometimes deep, are all about love.

He is known as Muck, Muck Sticky, the Sticky Muck, or the Nifty Mervous Thrifty. He is a tireless self-promoter and sincere ambassador of peace, friendship and personal empowerment. Muck has a crush on Kate but is unable to express his feelings for her.

Slender with glasses and a beard, Brad is a musical genius; he seems to play with everyone in town and fronts a band called Snowglobe. Brad is dependable and knows his way around Packy’s studio.

Rock star and mother, Alicja is a bad a-s, punk rock musical powerhouse and the subject of one of Wally’s many documentaries. She demands everyone’s attention when she is rocking out with her band River City Tanlines.

Harlan T Bobo’s ironic, tortured lamentations have established him as one of Memphis’s top singer-songwriters. At once humorous and sincere, Bobo’s voice is much the soundtrack for a packed Saturday-night show as it is the Sunday-morning hangover that follows — a love-weary, public diary of romance and loss.

Jack Oblivian of Jack O and the Tennessee Tearjerkers – Rock/Indie

The patron saint of many a Memphis musician, Jack “Oblivian” Yarber has spread his hard-driving punk rock anthems around the world with disaffected charm.

When he’s home, the city’s musicians come together for his shows — both as fans and as students.