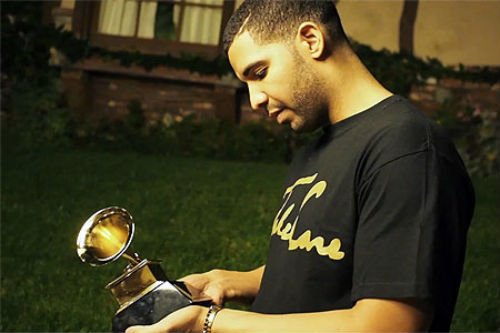 With all the hype built around Drake’s new album Nothing Was the Same, there has been anticipation of album leaks of songs, which one video seemingly offers of Drake claiming to be a song leak featuring what sounds like could be the Weeknd singing on it?

Meanwhile, another video titled Drake’s Nothing Was The Same Album trailer also has surfaced showing the rapper drinking out of his Grammy Award.

The supposed album trailer does not feature any music, unfortunately, just video clips.

Even though the supposed video leaks give little to imagination regarding the sound of the album, Young Money hip hop/urban music producer Detail has dished out some details on Drake’s upcoming solo album to XXL.

Adding more, Detail, who’s got the information and insight from being within the in-studio sessions with Drake during the album’s production process, claims Drake’s Nothing Was The Same will be “phenomenal.”

“I just came back from Canada working with Drake. I went out there to get the Canada lifestyle and it was great. He took me to a concert. [We] smoked some hookah. [It was a session] for Nothing Was The Same. That album is phenomenal.”

Drake’s Nothing Was The Same is set for release September 17, 2013, on OVO Sound, Young Money Entertainment and Cash Money Records, confirmed with a tweet by Drake, back on June 22.

Drake’s new hip hop single “Started from the Bottom” is expected to be featured on the album.