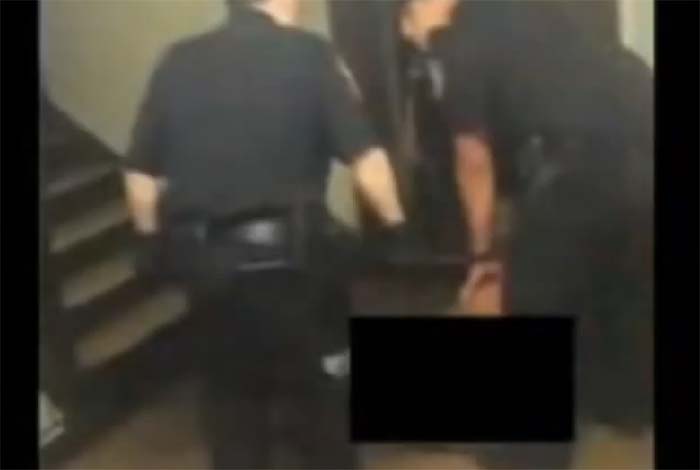 In a case of possible police brutality, harassment and, to say the least, humiliation, a 48 year-old grandmother in Brooklyn, New York was dragged out of her apartment and left naked and screaming for oxygen.

Denise Stewart, who has asthma, answered her apartment door to New York police officers in just a towel and underwear as she had just taken a shower.

The police officers allegedly claim they heard shouting from the inside of the home after responding to a 911 call reporting a domestic disturbance in the Brownsville, Brooklyn, building.

Though the 911 call allegedly came from a different apartment on a different floor, cops apparently, by mistake, went to Stewart’s door who was surprised by the officers and attempted to close her door.

When she tried to shut the door, Stewart found herself dragged out of her apartment where her towel came undone leaving Stewart exposed bare-breasted in only her underwear.

In the video, shouts are heard from other residents, who some were filming, in the apartment building, targeted at the police telling them that Stewart has asthma as Stewart is heard screaming for her oxygen.

Stewart is left topless and naked for minutes on hand as the officers are seen standing and walking about.

The 48 year-old claims to have been married for 16 years and says it took her husband 10 years to see her naked, so she feels disgusted, traumatized and embarrassed by strangers seeing her naked.

NYPD claim to have seen visible marks on Stewart’s 12 year-old daughter given reasoning to why they grabbed Stewart.

The family claims that Stewart’s 4 year-old son was peppered sprayed during the incident as well. Ironically, the 12 year-old, whom police claim that they were trying to protect, was charged as well with assaulting a police officer, criminal mischief and criminal possession of a weapon.

Police claim the 12 year-old denied any abuse, resisted and kicked the police car, broke out a window which a piece cut an officer’s chin, while they attempted to take her into custody with child services.

The incident is currently under investigation by Internal Affairs.