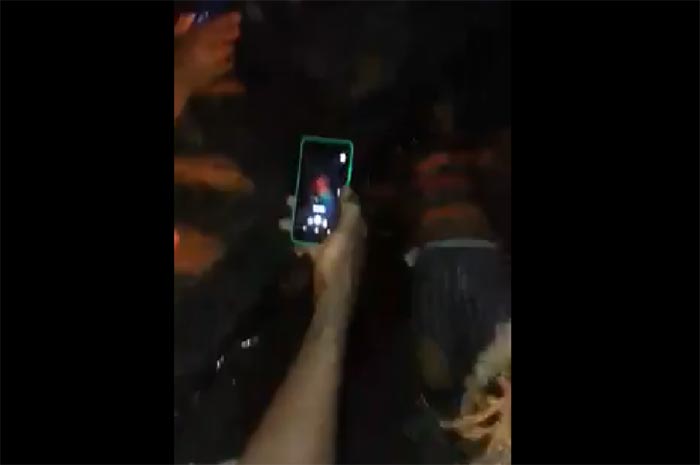 A shocking and bloody video of a man allegedly beaten unconscious after a brutal fight on Beale Street in Memphis, TN has gone viral on social media sites.

Even more shocking is the video apparently shows the man lying in his own blood, with his pants down to his ankles, for more than four (4) minutes, and it could have possibly been 15 to 20 minutes, according to sources, before Memphis Police arrived on the scene.

A crowd of people were standing around the incident, some recording video on their cellphones, while at one point, one person is even seen going through the man’s pockets.

Beale Street is infamous and always occupied by locals and tourists so is one of the streets in Memphis where Memphis police are present around the clock.

Still, the shocking video of the man, allegedly beaten unconscious lying in his own blood, is 4:57 in length and shows no help arrive until the point of 4:35.

Though the video recording is nearly 5 minutes, sources say witnesses claim the man was on the ground bleeding for over 20 minutes before police arrived.

Allegedly, the senseless crime and incident involved a fight initially between the unconscious man and a female or females, which led to another man getting involved who knocked the man out unconscious.

Rumors circulated that the man was pronounced dead after being taken to the hospital, however, fortunately, the man survived and is said to be in non-critical condition after initially being listed in critical condition.

According to authorities, the man, reportedly intoxicated, would not tell police what happened or identify who was involved, simply saying “I’m straight.”

Meanwhile, while details are sketchy, no arrests have been made and police are currently investigating the incident.

This unfortunate news and happening comes during Elvis Week, a 10-day Elvis Celebration held in Memphis where locals and tourists celebrate on Beale Street and at Graceland, which officials say won’t impact the Elvis Week events.