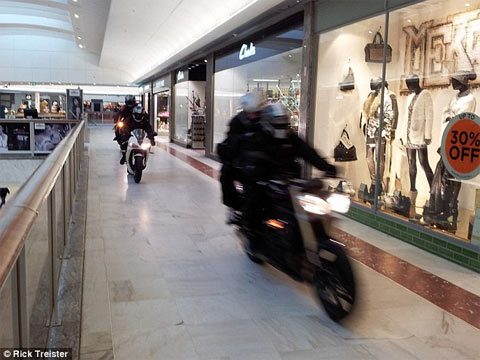 What looked like a scene from an action movie got real for people inside Brent Cross Shopping Centre in London moments after the doors were opened. Six people on three motorcycles rode through the mall breaking glass and robbing from businesses leaving patrons running and business owners screaming such as Fraser Hart jewellery store.

The six people are reported to have smashed the glass windows with bats and pickaxes and racked up on jewelry and watches while leaving an alleged $3 million dollars in losses and damage. Customers who were at the scene believe the robbers were targeting expensive jewelry such as Cartier and Rolex watches.

It was by coincidence that Rick Treister was heading to the Apple store when he heard screams and windows breaking and captured a photo of the bikers and video.

According to Treister, he didn’t have time to be scared and he did what any person with a camera would do.

Meanwhile, the bikers were caught on video camera phone and can be heard shouted something as they ride by.

Meanwhile, London authorities say they found the bikes 15 minutes away from the location and are looking for the suspects and are investigating the scene. Anyone who saw the bikers near the vicinity are encouraged to contact authorities in north London, UK.