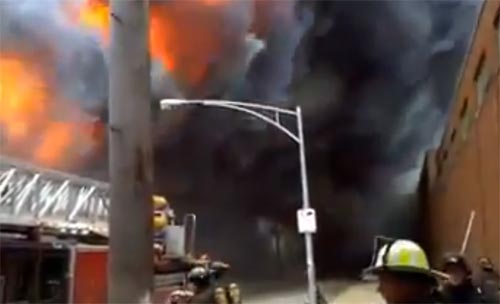 In southern Brazil, more than 230 people are reported dead, killed in a Brazil nightclub fire early Sunday morning. The blaze at the local Brazilian nightclub named Kiss was reportedly to have been caused by pyrotechnics used by a band playing at a university party.

According to police, the pyrotechnics used by the band reportedly hit the sound insulation in the ceiling causing the blaze.

Survivors of the fire describe the incident as horrifying as they tried to escape. Some report that security guards at the club wouldn’t let people out the club doors and, when victims disclosed to staff at the party that a fire had broken out, they were asked to pay their tab for their bill instead of being allowed to leave the venue for their safety. The result ended with piles of bodies stacked at the doors, which almost prevented firefighters from entering the building.

Reportedly, Brazilian bars are known to not let patrons leave without paying their tab at the end of the night, however this time, this rule may have ended up causing hundreds of deaths, which could have possibly been prevented.

Out of the dead victims, school officials at Federal University of Santa Maria state, at least 101 are students at the university.

So far, three people have been arrested in connection with the fire (one co-owner and two band members) and a fourth suspect is being sought.

Meanwhile, funerals have already begun for some of the victims who were killed in the Brazilian nightclub blaze.