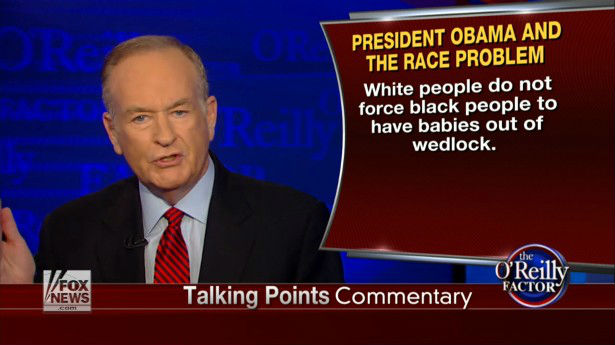 Fox News host Bill O’Reilly, on his show The O’Reilly Factor, recently talked about President Obama regarding race and the Trayvon Martin’s shooting case and blamed the choices of single black mothers for the violent crime rate among black people.

O’Reilly claims that The President has “no clue” how to “solve problems” of crime in the black community.

O’Reilly on his show says the crime in black communites is because of the disintegration of the African American family and mainly the fact that 73% of black babies are born out of wedlock.

Then O’Reilly hints that there should be more public ads telling young black girls to avoid becoming pregnant.

“White people do not force black people to have babies out of wedlock,” says O’Reilly.

O’Reilly says that it’s a “personal decision” that needs to be publicly discouraged in black communities, along with longer jail terms for drug dealers, and more responsible entertainment (mainly hip hop) in media.