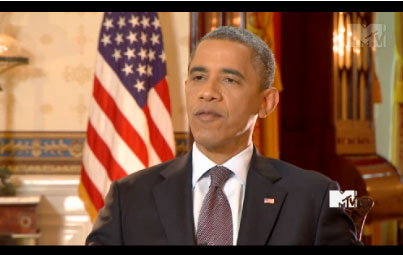 President Barack Obama has expressed his views on hip hop and reveals some strong thoughts saying that hip hop is “the most vibrant musical art form” right now and has been over the last 10, 15 years.

“You know, I think the most vibrant musical art form right now over the last 10, 15 years has been hip-hop,” Obama says in his video hip hop interview with MTV‘s Sway Calloway.

The President made the statement after Sway asked him about his thoughts on what artists today he believes “upholds the tradition” of informative, conscious music like that of artists such as Bob Marley, Bob Dylan, Public Enemy’s Chuck D and Rage Against the Machine.

Obama went on to talk more on how music affected his college days, the civil rights movements and how he hopes to see more youth communicate their messages saying “I would hope that we’re gonna see more of that. You can set the world on fire in a positive way.”

Watch Barack Obama’s speak on his views on music and hip hop.