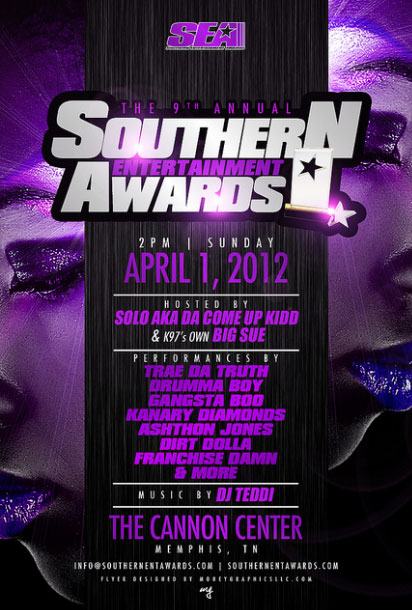 The 9th annual Southern Entertainment Awards and Conference will once again be hosted in Memphis, TN in March 2012.

The 9th annual SEA and conference will be held from March 29 through April 02 at Memphis’ Cook Convention Center and The Cannon Center.

This year, the SEAs will be placing emphasis on D.J.s, recognizing their vital role in the foundation, distribution and development of our music.

The weekends events will include networking opportunities one could only imagine, informational panels, product demonstrations, the SEA Indie Artist showcase all leading up to the Southern Entertainment Awards ceremony.

The ceremony will be co-hosted by Big Sue, assistant program director for Memphis 97.1 hip-hop/r&b, and ATL’s Solo aka Da Come Up Kidd.

Tickets and VIP passes for the 9th annual Southern Entertainment Awards 2012 are available at southernentawards.eventbrite.com.