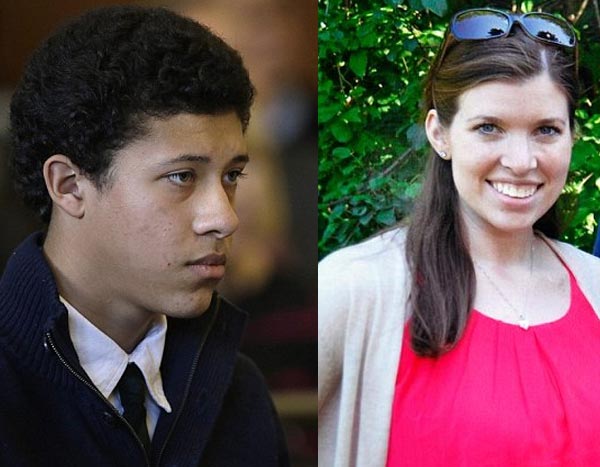 Authorities say Colleen Ritzer, a 24 year-old high school math teacher was raped and murdered in the bathroom of Danvers High School in Massachusetts.

The suspect is believed to be a 15 year-old student named Philip Chism, a transfer student from Clarksville, TN.

Authorities say they have Philip Chism on camera following Ritzer into the bathroom where he allegedly raped her twice, once with a tree branch and then took her life with a box cutter.

Cameras then have Chism coming in with a recycle bin into the bathroom which he is believed to have used to transport Ritzer’s body outside where he dumped her in a ‘sexually positioned manner’ along with a note saying “I hate you all,” authorities say.

Chism allegedly has a past of run-ins with the law for animal abuse.

Meanwhile, family of the murdered teacher, along with supporters up to 3,000 people, turned out in Andover, MA to a benefit marathon in efforts to raise $5,000 for a scholarship fund in Ritzer’s name; while Chism is being held without bond on charges of aggravated rape and first degree murder.