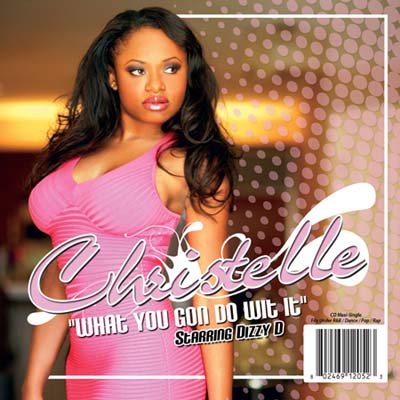 New, upcoming female R&B singer Christelle in the song “What You Gon Do Wit It” featuring up and coming Tennessee (Jackson/Memphis) rap artist Dizzy D. The #1 chart topping song on Billboard’s Hot R&B/Hip-Hop Singles Sales chart features production by Jbeats, engineering by Don Deal and is released under McGann Music/Kings Mountain/Deh Tyme. Listen to the song + get more info on Christelle after the jump.

This Las Vegas based, nineteen-year-old Pop/R&B artist has taken on countless challenges in her young life and career, and has successfully met every single one. Her hot new songs herald the arrival of this very special young artist. Her music will “move your body and put a smile on your face”.

Born in Gabon, West Africa, Christelle grew up listening to French, African and American music, but the music that struck a chord in her was the American R&B and Hip-Hop of artists like Beyonce, Ashanti, Brandy, Jay-Z, 50 Cent and Mariah Carey. As Christelle recalls, “Even though I couldn’t understand the lyrics back then, no other music made me feel as good.”

Arriving in Las Vegas in 2006, she immediately faced an enormous challenge – the language barrier. She explains, “It was a very difficult transition. It was horrible to not be able to communicate with people. I gained a tremendous amount of respect for the millions of immigrants that make up so much of America.”

Determined to learn English as soon as possible, Christelle enrolled in an intensive English school, graduating in December of 2007, qualifying her for the university system.

Christelle is currently recording with young producer Ryan M. Tedder from Cleveland, adding a more urban pop and R&B flavor to her music, as she plans for her breakout year of 2009. “I loved recording the songs I did this year and seeing them grow,” she says with a smile. “I know I’ve come a long way, but I’ve going to go much further this year.” She’s looking forward to touring and for her music to be on the radio, and as she says, “I just hope to give back the good feelings I felt when I was in Africa, listening to American music.”