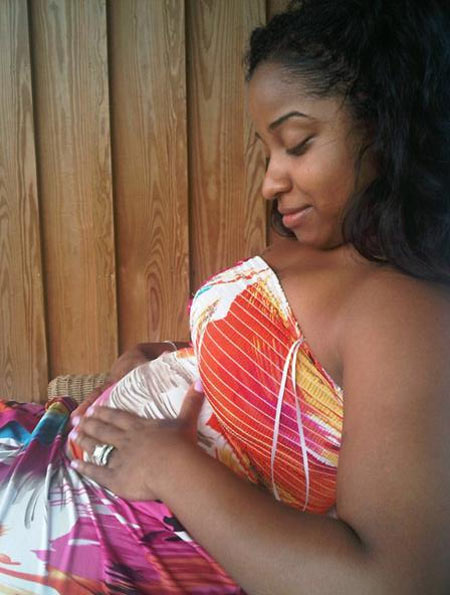 Ever since this photo of Antonia ‘Toya’ Wright, the ex-wife of hip-hop artist Lil Wayne, now married to music executive Mickey ‘MempHitz’ Wright, was posted on her Twitter, gossip about the celebrity socialite being pregnant has been non-stop. The photo shows the reality TV star and New York Time’s Best Seller book author holding her stomach as though she is expecting a baby.

Toya Wright, 28, the mother of teen daughter Reginae Carter, with rapper Lil Wayne, has since came back to dispel the rumors that she is pregnant.

If you ask Toya Wright about her being pregnant the answer is… false.

While gossip continues about the “Toya and Tiny star,” the happily married couple have been busy with expanding their business ventures which include a clothing line available at Wal-Mart, an endorsement with Memphis based hair product company Ampro Industries, the reality show Toya: A Family Affair and an upcoming reality show The Mistresses, running a boutique called G.A.R.B, amongst other endeavors.

According to the Hitz Committe CEO and “Do Work” brand entrepreneur MempHitz, who wed Toya on last year and made everything Wright, he says he is enjoying married life and it has been keeping him focused.