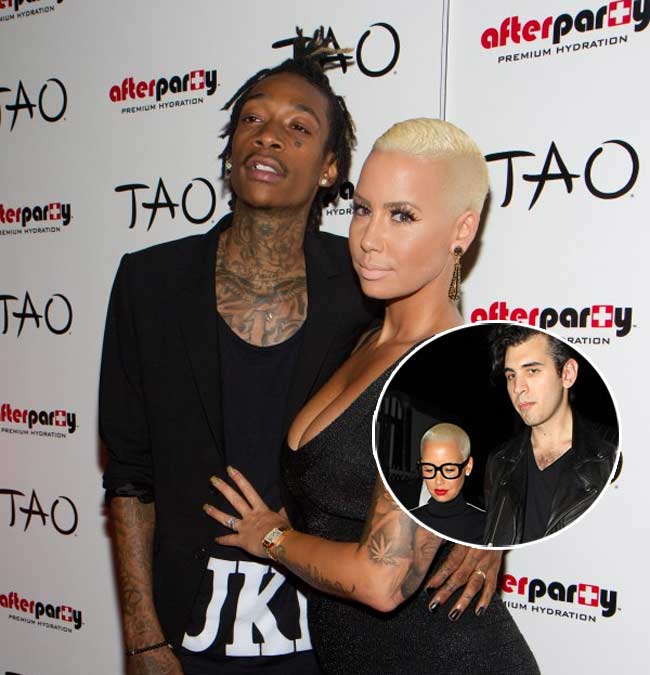 Model Amber Rose has been spotted out with Kiss rocker Gene Simmons’ son Nick Simmons following her divorce news and split from Wiz Khalifa allegedly after walking in on him cheating on her with two women at the same time – twins, yes, biological twin sisters.

It has only been a couple of weeks since Amber Rose reportedly filed divorce from Wiz Khalifa and now last Thursday night the celebrity model was seen reportedly getting cozy on the dance floor with Nick Simmons.

Of course this has now left everyone to believe that the celebrity model is dating the son of Kiss front-man Gene Simmons while initial rumors had her allegedly dating another Nick – her manager and newly boss Nick Cannon, who Amber Ross recently signed a deal with the America’s Got Talent TV host’s label and management company Ncredible.

The rumor that she was having an affair with Nick Cannon was slammed by Rose over Twitter who then sparked rumors of infidelity about her estranged husband Wiz Khalifa.

Amber Rose said she would never cheat on her husband but her ex can’t say the same.

Rapper Wiz Khalifa later responded that the marriage was over before Amber Rose reportedly showed up in the wee hours at his house where he was there allegedly with another woman or according to DJ Peter Rosenberg of New York’s The Hot 97 Morning Show, he was there with two women at the same time.

So, we guess now the question to be answered likely by Rose herself is whether the model/singer is dating Nick Simmons. Only time will tell.