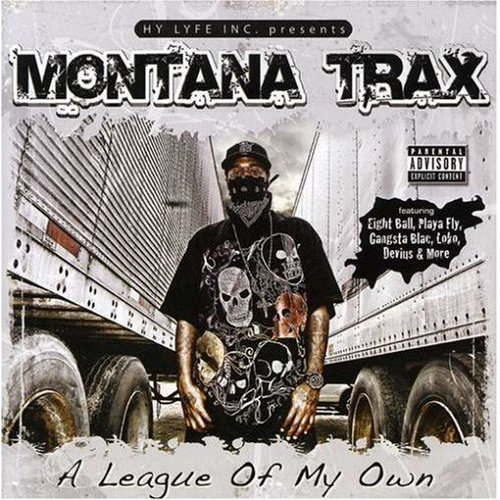 More note worthy as a producer than a rapper, Montana Trax is the fuel that sparks the fire…

It was yet another long night in a Memphis, Tennessee studio where Kevin Butler, later known as Montana Trax, made the finishing touches to beat number 231. He felt good about this track, more than any other beat in his arsenal. It had Willie Hutch’s “Theme of Foxy Brown” sampled in it and he knew he had a hit but he needed a second opinion just to see if he wasn’t tripping in his own self indulged gratitude. He let a friend (who knew MJG personally) hear it, who immediately felt that it sounded like something 8ball and MJG could flow on. The friend passes the track along to MJG and a few weeks later the rapper’s manager calls Montana saying that they would like to work with him. The rest is history. Montana would then go on to produce tracks on the highly anticipated “Living Legends” debut platinum Bad Boy album by 8ball and MJG.

Montana Trax has been in professional production for over 7 years. His extended but quiet track record includes the likes of working with world renowned artists such as David Banner, Trillville, Ying Yang Twins, Playa Fly, Skinny Pimp, Mac E, 8ball, and MJG. After many accolades producing behind the scenes, Montana decided to release an album of his own entitled “The Boy Something Great.”

With the success of his debut album [“The Boy Something Great”] in resurrecting Playa Fly and Minnie Mae Mafia, mixed with the continued success of production for other artists, he [Montana Trax] returns with a new album released by his own label Hy Life entitled “A League of my Own” which features himself now as a rapper.

“A League of my Own” features more of the on-the-verge underground rap artists such as Devius, Ammo, Loko, Mac E, Ghetto, Cuzo and legendary Memphis rappers such as Playa Fly, 8ball, and Gangsta Blac. The album begins with the track “I’m Fresh” where Montana boasts on how he balls through cities going to malls with U-hauls clearing out merchandise. The melody is supported by synthesized piano keys that accompany the hard hitting bouncy blaring beat. There’s also a remake of Uncle Luke’s rump shaker classic “Shake what ya momma gave ya” in the track “Tuitty Fruitty” featuring 8ball and Devius. Montana Tracks also offers an interesting interlude aka “tanalude” where he explains how he got his name from his homeboy Hollywood in north Memphis who called him Tony Montana where he’d later drop the Tony and leave just Montana until he did the buzzworthy Playa Fly and Mac E song “Got Deals” where at the end, Playa Fly spat the famous phrase “Montana Trax and the voice of the great!” From that phrase Montana Trax received his moniker where listeners mistaken Playa Fly for saying “Montana Trax and the boy something great!” Montana Trax took the phrase and ran with it and now is known for being Montana Trax “The boy something great!” with being heavily associated with Mac E and Playa Fly, the best song on the album entitled “Yes” which is a remix that features the two notable blueprinted Memphis rappers along with up and coming Gutta. The track includes a rock guitar string that loops as the clap-back beat conjures the drama filled lucent lyrics presented by the bluff city lyricists.

Montana Trax’s “A League of My Own” is somewhat a monumental Memphis rap album. It is the first of its kind where a home-bred rap producer releases his own album that has the potential to be heard world-wide similar to that of notable producers who’ve found success in releasing solo albums such as Lil’ Jon, Dr. Dre, Timberland.

Montana Trax is the next generation of the Memphis sound. He is apart of the generation that was raised on Triple six Mafia, 8ball & MJG, and Playa Fly. He takes the driver’s seat with more hits to come and breaking new artists while resurrecting legendary rappers such as Playa Fly and others. With every powered engine there is a fuel that keeps it going. More note worthy as a producer than a rapper, Montana Trax is the fuel that sparks the fire in Memphis rap today. The boy is something great.

A League of My Own