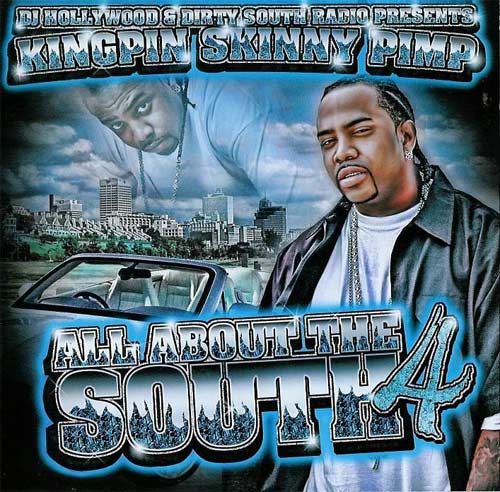 Mixed and cooked up with Memphis rap classics..

Being one of the pioneering original MCs of Memphis, Skinny Pimp has had a big influence on making the Memphis rap music scene what it is today alongside Eightball & MJG and Three 6 Mafia of who he was once a member of. Making way for new up and coming Memphis rappers such as Yo Gotti, Yung Kee, and Chrome just to name a few, Skinny Pimp’s style and swagger has been imitated by many as second nature. Born Derrick Dewayne Hill, Kingpin Skinny Pimp was raised in the Dixie Homes area of North Memphis (which is now demolished). It was 1985 when he began rapping while he attended Herman Junior High School. Soon after, he hooked up with DJ Squeeky and then Three Six Mafia, known as Triple Six Mafia, where he would flourish as a member of the legendary crew and soon thrived as a solo artist with production from DJ Paul and Juicy J who he no longer affiliates himself with. Skinny Pimp along with many others who have known him over the years accuses movie director Craig Brewer (who wrote the Oscar winning movie Hustle & Flow), for copying Skinny Pimp’s life story and portraying it on film through world renowned actor Terrance Howard. Some say Hustle & Flow was a direct biography of Skinny Pimp’s grind as an up and coming rapper in the streets of Memphis.

After a long hiatus of being out of the music industry’s illustrious light, Skinny Pimp once again arose from the dark streets after he felt that his image was jacked and simultaneously felt slighted after not getting an invite to be in the Hustle & Flow movie. DJ Hollywood and Dirty South Radio catches up with Skinny Pimp and releases this epic mix tape that catches the Kingpin in rare form as he blatantly disses Three Six Mafia, shouts out his hoods in Memphis, and explains some of his spontaneously bold guerilla pimping tactics.

In DJ Hollywood & Dirty South Radio presents Kingpin Skinny Pimp – All About the South 4 Skinny Pimp releases some of his new songs which are mixed and cooked up with brazen Memphis classics from 8ball, Criminal Mane, and Tommy Wright III. DJ Hollywood also throws up and coming artists on the mix, Mr. Marcelo, Freeky T and Big Tuck out of Dallas Texas, Don Nitti, J-Nicks and Natureboy Rowe just to name a few.

From the door Skinny explains on the intro that he’s all about the south but he’s representing the “north north” of Memphis Tennessee. The first song which is entitled “Trick-A-Treat” compares a kid trick-or-treating on Halloween to a robber sticking up dope houses in the hood. Rapper Lil’ Gin accompanies Skinny with tongue twisting flows with vivid story telling methods. On the Joe the CEO produced track Shaky, Skinny sends a shout out to all hoods in the Bluff City. On the song itself the harmonious synthesized horns complements Skinny as he chants the song’s catchy hook “Why you hangin’ round here boy you know you ain’t cool/ U Shaky U Shaky U Shaky U Shaky/ I got that thing to yo’ head I’m bout to snap on you fool/ U Shaky U Shaky U Shaky U Shaky. Tracks that feature non-Memphians also complement the overall mesh of the mix tape. Dallas’ Freaky T & Big Tuck’s “All Way Dat Way” song exudes braggadocio rhymes that boast 400 everyday and 1800 for the good. This project definitely claims to be a dope boy’s patriotic anthem. On Skinny’s track “Come here B---h”, he talks in depth on how he finds his ladies for hire. Within the meat of the song, he spits lyrical pimping that is accompanied by space age melodies with complementary claps to maneuver the song’s message. Skinny Pimp also breaks in with freestyle interludes throughout the album. In one verse of his freestyle, he explains, “I’m still on some muphuckin’ getting’ money s--t/ and yeah n---a I can’t stand a muphukin’ Triple Six”. One clever song that involved metaphoric clichés was “Loose Lips Sink Ships” by Skinny Pimp and the infamous Don Nitti who releases his congruent assortment of flows, finagling every verb with heart driven emphasis. This song keeps the stop snitching street political campaign alive. The hook is straight forward in its approach. “You betta watch these niggas they’ll tell on yo a-s/ niggas settling out of court to split they time in half/ Loose Lips Sink Ships/ Shut your mouth lil’ fella/ Loose Lips Sink Ships/ I call’em Speedy Gonzalez.” On the intro to “What U Drinking” which features T-Rock, Skinny gives shout outs to his hood Hertz Village projects even though it was knocked down, he extends the shouts to Foot Homes BKA Foot Village. He also gives an array of shouts to 9th Street, Woodlawn, Smokey City, Hollywood, hyde Park, Douglass, Frayser, North Memphis, South Memphis, West Memphis, and Orange Mound. The “Errr-Day Remix” song which features former Rap City host J-Nicks is an ear busting banger that confirms the former day TV star’s wild side as he screams on the track “Man I’m drunk/High as a kite/I popped a couple pills got a n---a feeling right!” The mix tape continues with Indo G’s single “Purple Drank”, Greenwood Mississippi’s own GN Players’ song Ridin’ South, the classic Memphis anthem song from the original Rap Hustlaz “TV’s, 24’s, and Wang, La Chat, Gucci mane, and All-star’s “Get Doe” track, Rick Ross and Triple C’s “Where you from?”, Tommy Wright III, Charlie Brown, and T-Rock’s “Get up witcha kind”.

Overall the mix tape poses to be an album for a niche listener who enjoys the dirty south gangster rap that provides the latest trends, hood news, and latest disses. On the outro Skinny Pimp leaves with giving props to Mtown Underground Magazine and Concrete Magazine, Dirty South Entertainment, Montana Trax, Indo G, Gino, Gangsta Boo, 98.5 Internet radio and J-Nasty. Although DJ Hollywood’s name is not an household item, if he continues the All About the South Mix tape series with hot artists such as Skinny Pimp he would be knocking on the door of becoming one of the premiere DJ’s for keeping the south at its height. This particular mix tape showed first hand of how Skinny reframes from keeping a shy tongue. In an interlude he explained how many people in the industry hate to see how the south is on top. In response he orders the haters to “Keep the South out yo’ Mouth!”