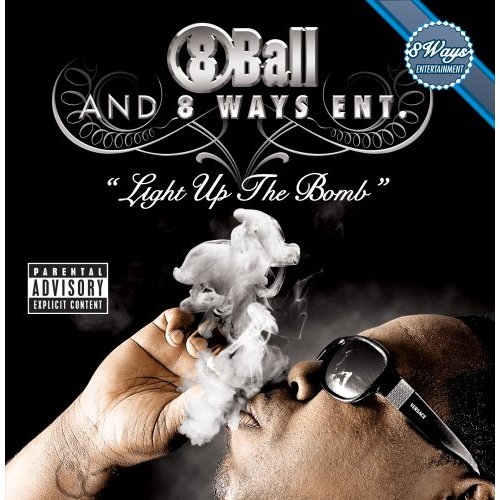 From free lance jacking to “space age” macking, “locking’em in a trunk” to being a pimp in his own rhymes, the Memphis-bred Premro Smith better known as 8 Ball has been laying it down for over a decade with his braggadocious flow which has enabled him and his comrade, MJG (Marlon Jermaine Goodwin) to earn the respectful title of living legends. They literally came from “crumbs to bricks” and have consistently elevated themselves in an industry that many find themselves lost. They are one of the few dirty south rap pioneers who have helped hip-hop grow below the mason Dixon line. 8Ball and MJG have journeyed from the rough streets of Orange Mound in Memphis, Tennessee to Suave House Records in Houston, Texas, up to the notorious Bad Boy records in New York with Diddy. Representing Memphis in all facets of their lyrical content has scored the platinum rap duo entrepreneurial opportunities such as labels of their own, 8 Ways Entertainment and MJG Muzik.

Fresh out of 8 Ways Entertainment is 8 Ball’s second album as a label CEO where he cooks and mixes the elements of his street credibility, rap industry experience, pimp remedied philosophies, homegrown production along with some of the most feared Memphis MCs, all rolled in a blunt wrap to create the compilation conveniently titled Light up the Bomb.

As the “Bomb” is lit, the almighty “M Gang” is introduced to the world on their self-titled song with each MC pitching rigorous metaphors to the inundated listeners’ ears. Devious explains how he carries “two dessert eagles with Louis Vuitton Holsters” while wearing Gucci frames in his rambunctious description on what would happen to “haters” that cross him in his everlasting journey for cash. On “Another level”, he brags of getting Bud Davis drive outs showing that he is financially stable to the point where money is not an issue when selecting cars from a dealership. Also appearing on the “M Gang” track was Mac-E with his overshadowing ability to garner the listener’s attention with his unorthodox style of word play. A surprising addition to this introductory track is the female rapper, Loco. She makes her presence felt once she states that she will “dog all maggots”, referring to her competition (female and male rappers alike). The song is rightfully closed with verses from MJG and 8 Ball respectfully. “Get money like money was made for my pocket. If it don’t make sense it don’t make profit,” MJG raps on “M Gang.” “Get use to giving me money,” he continues as 8 Ball backs him up with a verse explaining what the “M gang” is based on: “Honor, Respect, Loyalty, and Living the Truth.”

Light up the Bomb takes you through many easily ignored issues of the Memphis street life. It paints a picture of the day in the life of a hustler, gangster, and a pimp. It shows why they do what they do in response to being economically abandoned and serve structural remedies for their daily street survival. It covers areas such as drugs, sex, club life, police harassment and even disease. “Purple Stuff” exploits Houston Texas’ influence on 8 Ball when he acts as a hood pharmacists/doctor poetically spitting his remedy for creating a hallucinogenic drink and smoke session. It shows that Mike Jones, Paul Wall, and Three Six are not the only wordsmiths who can rap about the “Purples.”

Memphis’ own Kevin Butler aka Montana Trax, 8 Ball’s right hand production guru, displays his greatness on various tracks, including “Swervin” where Loco shines her lyrical skills in more depth. The “This ain’t that” track featuring MJG gives listeners a vivid picture of why 8 Ball and MJG are living legends. This song, carefully crafted by Montana Trax, takes you back to the likes of classic albums such as On the outside looking in (Suave House Records, 1994), On Top of the World (Draper Inc., 1995), and In Our Lifetime (Draper Inc., 2003). It also shows why the young producer, Montana Trax, 28, was 8 Ball’s debut album in launching his label, Montana Trax – The Boy Somethin’ Great (8 Ways Entertainment, 2006). Montana also lays his magic touch on tracks such as the self-titled album song “Light up the Bomb” where 8 Ball boasts, “I’m a beast with the pen,” going solo on the entire song.

Light up the Bomb also gives its fans a gargantuan dosage of club banging hits. “Time2hitdaclub” could be deemed as a club anthem or more fittingly serve as an on-the-way to the club anthem helping the “D-boys” and “D-girls” prepare for a night out at the club. 8 Ball jaws the hook “Hustle hard all week, its time to hit the club”, to ready all for a magnificent night out at the club. Other tracks on the album also revisit the brazen club aspect of gangster rap. The club glorifying tenure of hip-hop is growing somewhat tired, due to sometime violent displays. 8 Ways Entertainment show you what their perspective of the club life is like. “Clear it out” which includes traditional base line beats and synthesized cathedral church bells transforms the club dance floor into a war zone where the hook calls for all Vice lords, Gangster Disciples, Bloods, and Crips to throw their sets up high and represent while clearing the floor out. This song instigates thick controversy and promotes violence if played in social gatherings. Though it may hold negative connotations towards social unity and serve as a virus for the prosperity of hip-hop rap as a whole. Club violence remains a harsh reality in society and the song does a good job of portraying that. Another club song from the album is “Sitback”, which holds resemblance to a stripper’s anthem. It orders the regular Joe to lay back, relax, “watch a movie, she’s so into it.” Devious shows his range on this song being able to naturally flow over heavy synthesized string rhythms describing himself as a live “tip drill”. “What do I have to do to get you and your clothes off?” Devious shamelessly asks.

Some of the best songs on Light up the Bomb are ones that include special guest appearances. “Battle Field” has the potential to be a certified street classic that features DirtBag, Big Gipp, and 8 Ball ripping rhymes over flutes, piano melodies, and drums. The song paints a vivid picture of the rap industries pros and cons. “So many battle field scares/while driven in plush cars/this life as a rap star is nothing without heart,” preaches 8 Ball. He describes the rough industry and how he has prevailed through perseverance. Dirtbag shows his tropical versatile swag through clever rhyme play while describing his drive to survive and elevate in the rap game. Big Gipp claims “The slicker the tongue/the more money I make.” “Yo B---h” highlights MJG’s “pimp-tight” ability to speak his way to being something like a pimp. Another star filled track is “The Greatest” featuring Juvenile which depicts how the two multi-platinum rappers made it from crumbs to bricks. They both give an insiders’ view of the world that goes on in their heads that allow them to continue the grind. 8 Ball poetically spits, “We party hard smoke and drink away the bad thoughts/ We hustle hard and try harder not to get caught”. He continues, “A black man trying to eat like a white man/ We come from nothing less than 0 to a hundred grand/ my childhood hero had a pistol in his hand.”

Light up the Bomb may mislead fans into believing 8 Ball graces us with his presence on every track by him being on the album cover but the tracks that he is on makes up for that confusion. The featured artists of the 8 Ways crew show their lyrical range, but some are put on the pedestal more than others, Devious and Loco to name a few. Overall, Light up the Bomb is a compelling heated album that charismatically reflects the personality of the Memphis streets. Even though the majority of the production is originally superior and genuine, the album still lacks cross-over ability to penetrate listeners outside of the southern street realm with content that has been repetitive to the third degree (money, cars, clothes, and clubs). Nevertheless, the star power of 8 Ball alone gives it the potential to stay in CD and mp3 players across the world and allows him to introduce his squad to the masses. If you are a die-hard Memphis rap fan, this is a must buy. Not only does it showcase what 8 Ball has been holding in his arsenal but the next Memphis rap star has been revealed to the world. Only time will tell you which flow master will prevail as a leader from the roster as Lil’ Flip from DJ Screw or Lil’ Webbie from Pimp C, or even Young Dro from T.I. The “Bomb” has been lit and now 8 Ball’s fire will burn throughout the dirty south and hip-hop as a whole.