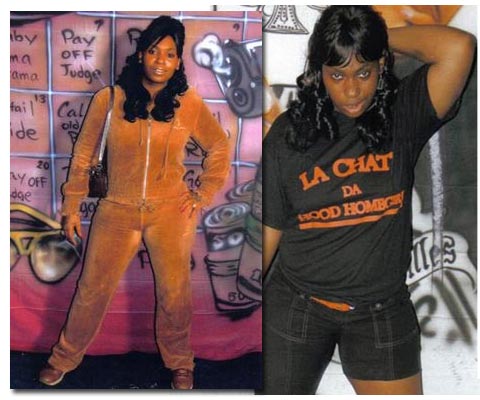 This week Southern female rapper La Chat spoke with Memphisrap.com on how she is ‘using what she got’ on her new album ”Bad Influence” featuring Gucci Mane, Yo Gotti, All Star and the Block Burnaz.

This week Southern female rapper La Chat spoke with Memphisrap.com on how she is ‘using what she got’ on her new album “Bad Influence” featuring Gucci Mane, Yo Gotti, All Star and the Block Burnaz. She also touches on her new deal with Yo Gotti’s label Inevitable Entertainment and the confusion between her group Hardhittaz and Crunchy Black’s group also called Hard Hitters. In this in-depth interview, La Chat also answers the question that many have wandered: “Does the two reigning ‘Queens of Memphis’ Gangsta Boo and La Chat actually get along, or is there a hidden beef we may not know about?”

La Chat “Besides being on top of my paper work, I just been rapping my a-s off,” the now different La Chat of today versus the La Chat of yesterday tells MemphisRap.com. When asked about her feelings of Memphis in the music business today, the Memphis-bred rapper says “We gettin there. All we gotta do is keep making good music cuz they cannot deny us. We Memphis Mutha***** Bumpin!”

Check out the exclusive interview with La Chat:

MemphisRap.com: When we last did an interview it was done by our guy Eric “Memphis Slim” Nichols (R.I.P.). Since then how have you been doing?

La Chat: I been good ya know, holdin it down.

MemphisRap.com: You with Yo Gotti, right?

MemphisRap.com: We heard you got some kind of deal with Yo Gotti, can you touch on that?

MemphisRap.com: So what’up with the new group we hear about you formed called the Hard Hittaz?

MemphisRap.com: Are you and Crunchy Black working together on the Hard Hitters?

La Chat: Hell no! Look dat was my idea before I left HCP. I called Paul, I had a song called Hardhittaz and Paul said dat was so hard “Hardhittaz”, but I ended up leaving and the next thing I know is that Crunchy was claimin Hardhittaz. He can keep it real, Paul gave him that idea. I try not to knock him cuz I know Paul didn’t probably tell him he got it from me, but I do knock Crunchy for mentioning me in his interviews and don’t really know what’s goin on. But I ended up sayin f**k it, it ain’t like a n---a aint took none of my ideas before, but really I let em have em cuz I always can come wit something else. That’s a gift that some folk don’t got, so Crunchy you can have dat my n---a, do use me for a publicity stunt pimp, we da Goone Squad now. Want that name too???

MemphisRap.com: You were suppose to come out with your album “Bad Influence” a little while ago and it got pushed back, and now you came out with “Bad Influence” on November 28. When did the new date come about? Was it something that happened suddenly?

La Chat: Yeah it suddenly happened and it really wasn’t going to come out then, but the album was in demand, so we decided to gone put it out but gone do the heavy promo at da top of the year 1st quarter.

MemphisRap.com: Do you think you’re a bad influence?

MemphisRap.com: What made you choose the title “Bad Influence” for your album?

La Chat: It’s self explanatory, you will be amazed at some of the things I have influenced people to do… especially niggaz (LOL).

MemphisRap.com: Dig dat. So, you got about 14 tracks on this album right?

MemphisRap.com: The album got appearances by Gucci Mane, Yo Gotti, Gangsta Boo, All Star and the Block Burnaz, right?

La Chat: Well Boo didn’t make it in town to get on it, but we do got a lot of music together, everybody else is on there doe.

MemphisRap.com: What track did you and Gucci Mane actually work on?

MemphisRap.com: You’ve done a couple of other pretty recent songs with Boo right?

MemphisRap.com: Are there any other features on the “Bad Influence” album besides those mentioned?

La Chat: Nall, Nall…dats what it is.

MemphisRap.com: How was it working with everyone? Does any particular experience or person stand out in your mind for any reason?

La Chat: Yeh, Gucci Mane. He’s so crazy, he’s his own biggest fan, he loves what he does and it shows. He finished writing, he was so excited, he was like man Chat dis s**t is so bumpin wait til you hear dis s**t and he wasn’t lyin dat s**t was bumpin when he dropped it. So big up to Gucci Mane, dats my n---a. Oops I can’t use dat word can I? (LOL)

MemphisRap.com: Well I think you done already, lol. So who produced the tracks on the album?

MemphisRap.com: Do you do any producing while I’m talking about production or you’re just a straight up artist and now business woman?

MemphisRap.com: What parts of your business career are you most involved in?

MemphisRap.com: Out of all the tracks done on “Bad Influence,” which one is the most memorable and why?

La Chat: Nina, because it was well put together and you have to listen close to see who Nina is. What else… because dat one was true and personal.

La Chat: Nall, we all good we like best of friends. I tell her things I will never tell anyone else and she tells me things she would never tell nobody else kind of friends and don’t have to worry bout reputation or embarrassments…. (LOL)

MemphisRap.com: Was there ever a time when you and Gangsta Boo actually didn’t get along or was that just a rumor?

La Chat: Honestly, it wasn’t we didn’t get along we just didn’t deal wit each other. Ya know. Just because you don’t deal wit a person doesn’t mean yall don’t get along. We just had to get to know one another and now we know.

MemphisRap.com: Ok. Again, on the business side of things, what have you been doing maybe differently than before to advance your music career?

La Chat: Besides being on top of my paper work, I just been rapping my a-s off just takin it one step at a time. You know when you leave mama’s house you don’t walk into a mansion you crawl to one and that’s what I’m doing, crawling. I’d rather be crawlin than walkin and let somebody get all my money.

MemphisRap.com: How do feel about Memphis, as far as the music and entertainment business, right now?

La Chat: We gettin there. All we gotta do is keep makin good music cuz they cannot deny us. We Memphis Mutha***** Bumpin!

MemphisRap.com: So what else is new with La Chat and what more can everyone expect from you closing out this year and in 2007?

La Chat: Maine you know Chat gon’ give her all maine… I’m dedicated to da game, I’m so dedicated I ain’t gotta cheat to win. Ya feel me, be lookin out for my Southern Smoke Mixtape “Da Hood Homegirl” at a hood near you and fa sho go cop dat “Bad Influence” a gangsta b---h’s classic.

MemphisRap.com: Weren’t you also nominated in the SEA awards?

La Chat: Yeh. I won best mixtape “Artist of The Year” year before last and dat was 1st time I did a mixtape.

MemphisRap.com: Is there anythang else you want to add or say to your fans or anybody?

La Chat: I wanna say thanks Memphis for holdin me down and stayin true fans. Ya girl back, “Bad Influence,” in stores now.

MemphisRap.com: Well, it’s always a pleasure, and on behalf of MemphisRap.com, I want to say thank you, ya feel me.

MemphisRap.com: Looking forward to next time.