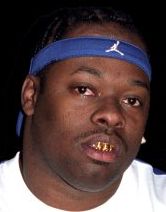 In an exclusive phone interview with Memphis’ own, Criminal Manne, we find out what’s up with him and his group Project Playaz, his new upcoming mixtape “Underground Rap S--t”, his upcoming projects and more..

In an exclusive phone interview with Memphis’ own, Criminal Manne, we find out what’s up with him and his group Project Playaz, his new upcoming mixtape “Underground Rap S--t”, his upcoming projects including the local radio-charts’ topping single “Tryna_Bust_Sumthin” off his upcoming album entitled “Rap Game Ain’t S--t” releasing this summer 2004 plus he talks of his plans for his fast growing independent label, Big Daddy Entertainment.

Also find out what it was like for him working on the song “Tennessee Titans” along with Tela, Yo Gotti, and Gangsta Boo & more.

MemphisRap.com: This is Big Guy with MemphisRap.com, interviewing with one of the hottest artists in Memphis right now, Criminal Manne. What?s up with you Crim?

Criminal Manne: Slow motion with it cuzin whatcha got going.

MemphisRap.com: A lot of the ?young bucks? don?t know who Criminal Manne is, could you tell em how long you?ve been in this game and a little bout yourself?

Criminal Manne: Ahh mane, Criminal Manne 12 years deep. A lot of folk, manne, I can?t explain it, Just put it this way, I been blind from the game. I?m just seeing some light. Everybody that don?t know me, now you finna know me.

MemphisRap.com: I read that at the age of 8 you realized that you had a talent, but at what age did you seriously begin rapping and treating it like an actual job?

MemphisRap.com: What, you started off out like in a small little group or something.

Criminal Manne: Yeah, first just use to be rapping at school, beating on the lunch table making up stuff, copying off Run DMC. As we growed older and I just kept on staying at it cause I like to rap.

MemphisRap.com: Right now, you have one of the HOTTEST songs on the radio called, ?Tryna Bust Sumthin.? How do you feel about that?

MemphisRap.com: Do you feel that this release will give people a chance to really hear your talent and see what you can bring to the table?

Criminal Manne: Ahh mane, u kmow I still got my home cooked flava on it, and outside my home, I got Flip on it. Who else? I suppose be doing something with Banner. Just can?t really say, cause I?m still in the making of doing it. Still in the process of selecting the songs I?m gonna put on it. Still got to take time out to select the songs I?m gonna use.

MemphisRap.com: Do you really feel that the rap game ain?t s--t?

Criminal Manne: Hell yeah, rap game aint s--t, cause I?ve been in it so long. This s--t ain?t s--t to me. I can do an album in a week, you know what I?m saying. I?m in the street so it ain?t nothing to talk bout the street, caused I?m already in the streets.

MemphisRap.com: I feel ya. Can we be expecting a video for ?Tryna Bust Sumthing??

Criminal Manne: Ahh, I gottathis. This song is blowing up so quick. I gotta let these folk know who it is and what?s going on. Even if I got to pay for it out of my own pocket. It gottabe done.

Criminal Manne: I?ll definitely let you know that, I want to see those hot girls.

MemphisRap.com: Now, over the years you have worked with D.J. Squeeky on a lot of projects. How is it working with him?

Criminal Manne: Ahh, Squeeky ah cool dude, Squeeky in his world. He?s doing him now, it?s time to do me. I?m expanding, I?m trying to get some of this money too.

Criminal Manne: Ahh naw, let me stop you?. I?m still in the group. It?s still Project Playaz till I go. We got some upcoming, stuff finna come out soon. Since we got out of this bad contract that we had with Rap-A-Lot, now we free, we trying to get this money.

Criminal Manne: I don?t know mane. I?m gonna put it to you this way. You can set on the fire, but you gonna definitely have to get out of the way, cause that fire gonna burn yo azz up.

MemphisRap.com: You gonna need some water or something to put it out.

MemphisRap.com: You were on the song ?Tennessee Titans? song along with Tela, Yo Gotti, and Gangsta Boo. What was it like representing the whole T.N.?

Criminal Manne: I love representing the M. Every time I speak out, I?m saying something about the M period. I gotta represent my hometown.

MemphisRap.com: How is Big Daddy Entertainment tied to you?

Criminal Manne: I own that.

Criminal Manne: That?s my s--t. I got my own label.

MemphisRap.com: So, who are some of the artists on your label and production team?

Criminal Manne: Mane, I got this young cat, he?s 18 years old he?s the one made the track Tryna Bust Sumthing that?s my producer. Couple of my artist, Young Key, C Mac, Mac Kane, Grove, Red Boi,, Darkside the list goes on and one I got a whole entourage ready to lock and roll. Got get them put out there. It?s definitely finna go down.

MemphisRap.com: Ahh yeah Ahh Yeah, you know Memphis, it?s about time we had ours.

MemphisRap.com: Tell us about your upcoming performance on May 16th?

Criminal Manne: I?m gonna show up and show out. You got Juvenile, Gotti then me, so I got to let them know that Crim is in the building.

MemphisRap.com: So where it?s gone be at?

Criminal Manne: At the Shell.

MemphisRap.com: I heard you got something planned this summer for the kids.

Criminal Manne: Probably gonna throw like a block party and giveaway school supplies?. Just whatever I can give back, just free on me. Know what I?m sayin, you got to give back to the community

Criminal Manne: A lot cats forget where they come from. A lot of folks wouldn?t able to do that, but now that I can do it, I?ma hurry up and do it.

Criminal Manne: Main you can expect everything, anything to be done. I?m a real rap hustler. Anything that?s got to be done, I?m gonna do it. Whatever?s out there to be done by a rapper, Ima do it.

Criminal Manne: Ahh yeah, Got damn right! Dis my city, I mean that!

MemphisRap.com: So ahh, what advice main would you give an upcoming artist whose looking to step up in this game?

Criminal Manne: Really, I?ll give you one scenario. Be smart don?t put you heart in the game or you?ll get your heart broken. Just be smart wit it, try to make the right moves.That game aint as easy as what it look like. You know what I?m sayin, a lot of people look at it like you can just jump in it in go platimun, or you can just jump in and ride clean. Don?t put your heart in it, cause you?ll get your heart broken, cause everything ain?t gonna go your way.

MemphisRap.com: Before we come to an end, is there anything that we didn?t ask you that you would like to say?

MemphisRap.com: Ahh Ok, that?s the interview but main before I letcha go bro, you know what I?m sayin, I just wanna say main that I really respect yo music and you really did a lot for the city of Memphis and it sounded good that you finna rep that music on a national level like you are finna do it.

MemphisRap.com: Yeah, that?s how you spose to do it main, Keep It Real!