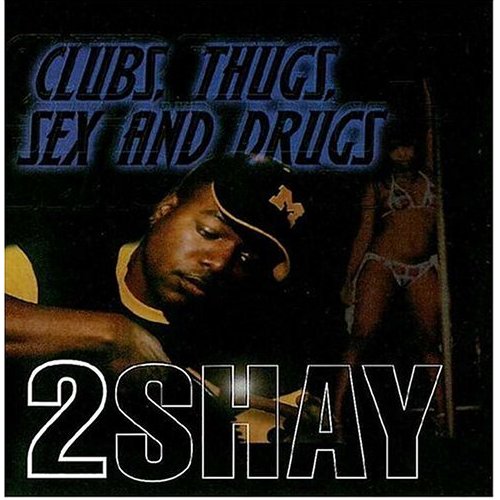 From tha Dawg House, 2 Shay talks about his upcoming album “Clubs, Thugs, Sex & Drugs”, his involvement in the music industry, working with Freddy “The Gorilla Pimp” Hydro and his thoughts on local radio and local artists in Memphis in an exclusive interview with MemphisRap.com. Check it out!

MemphisRap.com: Ok, we’re digging the new album title, “Clubs, Thugs, Sex & Drugs”, tell us how did you came up with that title and when does it drop?

“2 Shay”: Thanks. The title came about due to the nature of the album. Basically, those are the four subjects that kept coming up in the songs, not to mention the title track on the CD called “Clubs, Thugs, Sex and Drugs”. When we set out to record, we don’t have anything concrete in mind, we let the track take where it wants us to go and that’s what came out. We actually recorded about 40 songs for this project and once we decided to choose which songs would make the project, the theme kinda took on a life of it’s own. The project is due to drop in July or August ’04.

MemphisRap.com: Who are some of the featured artists on “Clubs, Thugs, Sex & Drugs”?

“2 Shay”: There are no major label artists featured on this project. We have a family of very strong rappers and vocalists. Not that we are trying to sound arrogant or conceited, but we truly feel that our artists can stand up lyrically next to any artists locally and nationally. All of the artists on this project are from the Shay-Dawg/Memphis Sound fam and you will be hearing a lot from them. They are: “Klassik, “M. F.”, “Nikki Boo”, “Da Ruins”, “P-Smooth”, and vocalist, “Cladette Janell Franklin”, and “Jerry Askew”.

MemphisRap.com: It’s release is under your own independent company, right?

“2 Shay”: Right, This is a Memphis Sound Records release that is due out in July or August 2004.

MemphisRap.com: Can you tell fans a little about your company’s goal in the Industry?

“2 Shay”: The goal of Shay-Dawg Entertainment is to become the premiere production entity and artist development company in the world. We want to be the leader in bringing Memphis music back to the forefront where it deserves to be and once was.

MemphisRap.com: Is there a single already in airplay, from the “Clubs, Thugs, Sex & Drugs”?

“2 Shay”: The single titled “Shake It For Me” and “Pimps, Players, Hustlers, Macks” is actually still at press as we speak. We will begin servicing record pools, clubs and mix shows as soon as we get them back.

“2 Shay”: That is available now for download and you can also hear it on the Memphis Car Audio Mix Tape “Street Hospitality Vol. 1” that is available through Memphis Rap.com and we also put 15,000 MCA mix tapes in the market for free at record stores, events etc..

MemphisRap.com: Tell us something about the Memphis Car Audio Mix tape CD Vol. 1 “Street Hospitality”. That’s some of your work too right? Freddy Hydro did the mixing on that right?

“2 Shay”: Yes, I produced it. Myself, Memphis Car Audio, and a local advertisement agency called Tactical Magic (shouts out to my main man Trace aka T-race) got together and formulated the idea of putting together a mix-tape with mostly local Memphis unsigned rap artists featured on it. I got my fellow North Memphian, DJ Freddy Hydro on the wheels. He put out the all-call for the music and we began to get flooded with new music. You would be surprised to see how much talent is located in the 901. We got well over 200 submissions from people wanting to be on the mix-tape. Our other potna Nate “Boogie” Spates A&R’ed the whole situation by sifting through those 200 submissions and it was on. It was a total team situation on this project. The new “Lil Flip”, “Game Over” that you hear on the radio, we had it first along with “Young Wan” featuring DMX, “Al Kapone” featuring “8 Ball” “Grey Goose”, We have five songs featured on the cd, “Pimps, Players, Hustlers, Macks”, “Ball-a-holics” with my man “P-Smooth”, “Throw it Up” by “Da Ruins”, “Yae-Yoe”, and “Break Da Bricks Down”. All of which will be on the cd “Clubs, Thugs, Sex and Drugs”.

MemphisRap.com: So, what was it like working with the “North Memphis Gorilla Pimp” himself, “Freddy Hydro”?

“2 Shay”: Hydro? That’s my dawg. He’s cool peeps. We are like-minded; we keep it real and uncut. He’s making big moves with the record pool they are developing here in Memphis and it’s looking good. Shouts out Freddy Hydro.

MemphisRap.com: What do you think makes a good connection between an artist and producer such as yourself and DJ’s such as Freddy Hydro; because we have gotten the vibe from local artists that they’re not receiving “the love” from local radio?

“2 Shay”: That is an excellent question. The answer to that is education and networking. Knowing how to package your product and present it and also your relationship with the people that you present it to. I’ve seen instances where people have gotten upset because DJ “So and So” wouldn’t spin his record. But what he failed to mention was that he brought a noisy cassette and a wack a-s song to the DJ. There was no artist information. Not even a contact number. There are ways of circumventing radio. You can deal with the local record pools, get your s--t crackin’ at the clubs in your area, internet and you can bang it out the trunk. I utilize all of the above plus radio. If you get your song hot enough, radio will come.

MemphisRap.com: What do you feel local artists and local radio can do more of or less of to create a better vibe amongst each other?

“2 Shay”: I think local radio does a fair job at supporting local artists. Do I think they can do a better job at it? Hell yeah! Local artists, like I said before, have to educate themselves on the business of music and get a true understanding of how this s--t works. “Cause if not, you are in for a rude awakening. We also can do less “click s--t”. Start working with these other artists and producers because you never know who’s gonna be the next to blow.

MemphisRap.com: We know already that you’re hip to the Internet, but tell us just how hip are you to the new online music Industry?

“2 Shay”: This new s--t is a trip?because you got major labels screaming over people downloading music and s--t, but the whole digital era of music was created by them out of their own greed. Now it’s coming back to bite them in the a-s. To an independent like myself, at this point, I ain?t trippin’. I will put stuff on the net specifically for download. I look at it as a huge promotional tool.

MemphisRap.com: So, ok we know you are affiliated with the Memphis Music Commission. Could you tell us a little something about that?

“2 Shay”: Yeah, right now I not only serve as a board member, but I am also on the executive board of the music commission. I’ve been on the commission for about 3 or 4 years. I was appointed by Mayor W. W. Herenton. It’s been a real experience. The music commission?s job is to basically help rebuild the music industry in Memphis. It’s a tough job. The commission takes a lot of heat with a lot of it due to the somewhat rocky past of the commission. But this organization like others had to go through it’s own growing pains to become a great organization. I think we are on our way to that now.

MemphisRap.com: So where do you see the music industry in the next few years?

MemphisRap.com: Where do you see yourself in the next five years? Still recording or leaning more towards the background or Industry side?

“2 Shay”: I will still be recording, but it my personal intent is to write and produce and star in movies as well. I’m working on a screenplay right now.

MemphisRap.com: How do you feel about Memphis rap now and the direction rappers are taking it?

“2 Shay”: I feel Memphis music has always been innovative and on the cutting edge. I feel that we will continue to do that and we will once again regain our top spot on the food chain. We are just waiting for that major, major rap star to emerge from the pack. I think it will happen real soon.

MemphisRap.com: A lot of young people especially college students who are grabbing music off of file sharing (peer-to-peer) software such as the popular brand “Kazaa” today don’t see it as doing anything wrong. To many people it’s just like recording their favorite radio station such as Hot 107.1 or K97 on the radio. What are your thoughts on this?

“2 Shay”: Right now I see it as a good promotional tool. My views might change on that later though when it really starts hitting my pockets. (laughing)

“2 Shay”: MemphisRap.com has positioned itself as the leading Internet conduit for information and music for the Memphis area music industry. I think the seed has been planted and is starting to sprout. If you keep watering it, it will become a tree.

MemphisRap.com: Aight, so could you lend a bit of advice to the upcoming artists looking to get into the Memphis rap game or the Industry period?

“2 Shay”: Know the business that you are in. Read. Ask questions. Get the best product you can. Expand your network of people. Work with everyone you can. And SUPPORT MEMPHIS MUSIC!!!!!

MemphisRap.com: Is there anything we haven’t covered or is there something that you would like to add to this interview or to the fans or anything?

MemphisRap.com: Well it’s been a real pleasure Shay, and we look forward to doing this again soon.