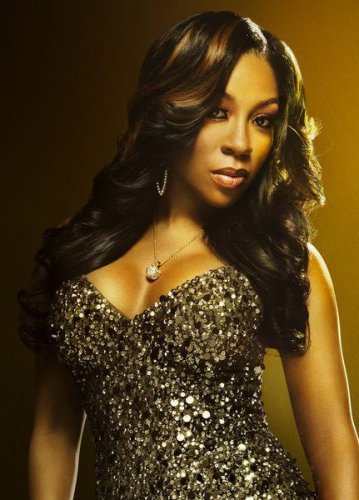 The fire between the two seemed to have initially ignited due to Karlie Redd first creating drama at her party with her friends which revealed Joseline as Stevie J’s sidechick right in front of his woman and baby momma Mimi Faust. Next, it was for allegedly telling her producer that he’s working with the wrong artist during her music showcase/listening party.

K. Michelle, who sat down with Mimi (who has been having her own baggage of problems), agreed during their girl time at the nail salon, to have Karlie Redd meet-up with the two of them so they could speak about their issues.

As you know, the conversation didn’t start off so well, K. Michelle’s boldness was so powerful it struck a cord with Karlie Redd, who began shaking the table.

“Woaahhhh, this b-tch is shaking the table,” stated K. Michelle.

“I got you on tape,” said Karlie Redd after an exchange of words.

Things went haywire from there which resulted in K. Michelle throwing a napkin-wrapped fork (or something else from the table) in Karlie Redd’s face.

“Don’t you ever lie on me,” pointed K. Michelle at Karlie Redd as she was being escorted off from the restaurant table to calm down.

Karlie Redd continued talking at the table with Mimi and began beating on table. “I don’t care what a b-tch got to say. Once you put your hands on me, I’ll be at your house, today,” says Karlie Redd.

“B-tch shut your a-s up you stupid b-tch. You ain’t gon do sh-t, (b-tch) I’m from Memphis,” screams K. Michelle from what looks like the restroom.

Since the episode has aired, K. Michelle spoke with Atlanta’s Hot 107.9 and told the host(s) that both she and Karlie Redd can be cordial with each other now and that she only blames Redd’s family.

While K. Michelle says the two can be cordial with each other, Karlie Redd told Hot 97 that K. Michelle lied about her speaking to her producer and K. Michelle is just jealous. Rewind, wasn’t it Mimi who told Karlie Redd during their meet-up that she said that to K. Michelle’s producer? (Aaaarug, in our Scooby Doo voice)

Karlie Redd did admit later that she lied about having a tape on K. Michelle.