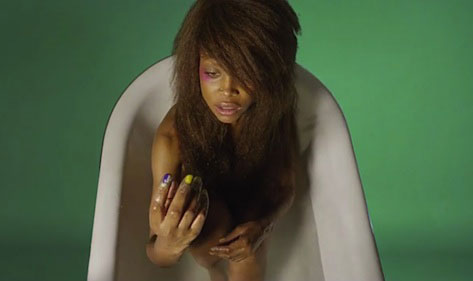 A new video of Erykah Badu has leaked showing Erykah Badu naked in a bathtub while other video portrayals show controversial artistic images of completely nude body parts dripping in glitter, a milk-like substance, and another red substance resembling blood.

Since the video, Flaming Lips, whose frontman Wayne Coyne has an alleged fetish for blood imagery, has apologized for the apparent graphic “unapproved” video of Erykah Badu and her sister.

‘The First Time Ever I Saw Your Face,’ release is from the recent collaboration-filled album release “The Flaming Lips and Heady Fwends.”

This is not the first time Erykah Badu has gone completely nude. The singer shed her clothes also for the controversial music video “Window Seat.”