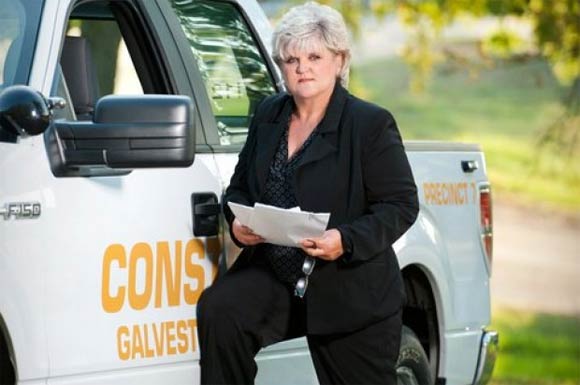 Deputy James Gist, who says he endured months of sexual harassment before allegedly being forced to resign, is suing his former boss lady Galveston County Constable Pam Matranga in Texas claiming she made him motorboat her on two occasions.

You’re probably thinking about riding the waves in a boat as you enjoy the sun rays — to ‘motorboat’ someone is not that.

To ‘motorboat’ is the act of pushing one’s face in between two breasts and to rock the head side to side.

According to ABC, Pam Matranga allegedly made lewd and suggestive advances at James Gist and even hinted at performing acts on him and spoke of dancing at a local club for “chunky chicks night” evidently to pique his interest.

In the lawsuit, James Gist states that Matranga lifted her shirt and placed his head under it and pressed her chest against his head in an attempt to make him motorboat her.

Most of Pam Matranga’s attempts failed except for her motor-boating which prompted Gist to take action against her conduct.

James Gist says he set-up a recorder on his office desk and a second attempt of trying to get him to motorboat was made. Gist yelled for her to stop during the incident hoping that it was picked up by the recorder, however the device was discovered by Matranga and the evidence was destroyed, according to the court records.

Five days later, Gist was suspended so he decided to resign.

According to the two term constable Pam Matranga, this is just an attempt to smear her name since she is up for re-election this month, May 29.