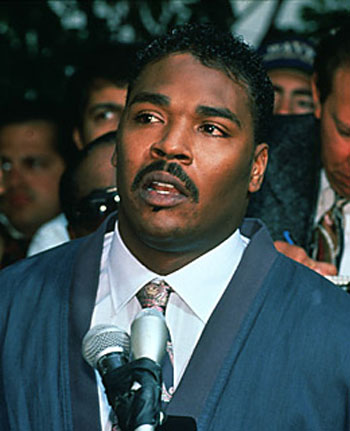 Rodney King – the man, the icon of ‘police brutality,’ whose 1991 video captured of him being beaten by LAPD police officers was the center of the infamous Los Angeles riots, was found dead at his Rialito, California home on Sunday.

King was found dead by his fiancee, Cynthia Kelley, at the bottom of his pool, as pictured below.

Police reportedly responded to a call made by Kelley at 5:25 a.m.

TMZ reports they pulled Rodney King from the pool and attempted CPR, indicating that King had possibly been left in the pool until the police arrived.

Still, unfortunately, they could not revive King and he was pronounced dead at 6:11 AM at a local hospital.

No word on how King may have drowned in the pool and details are sketchy, but allegedly Kelley told friends King was drinking and smoking weed just hours before his death up until she went to sleep around 2AM. She awoke around 5AM to a reported naked King screaming, reports TMZ. Kelly then allegedly heard a big splash, went down to find King at the bottom of the pool and that’s when she called the police.

Police have opened an investigation into King’s drowning and death which so far they reportedly see no signs of foul play, at least not currently.

King made worldwide headlines when, in 1991, a video captured his severe and brutal beaten by LAPD officers, in which instantaneously King became a national icon of police brutality. The officers, a year after the beaten, were acquitted, and that verdict heard nationwide sparked the infamous Los Angeles riots and smaller riots across the nation.

Following the riots, King made a statement, now infamous saying ‘can’t we all [just] get along?’