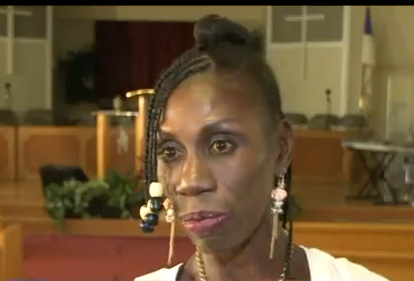 It’s not often we hear positive news or stories with a happy ending, but the story of Memphis, TN’s Jacqueline Phillips aka “Get It Girl,” the homeless woman known for her outbreaks of shouting, dancing and on occasions, undressing on the highly trafficked Winchester Road, just may be a story with a happy ending.

Phillips, after 10 years of being homeless and addicted to drugs, is quote changing her way of life and has already made a remarkable transformation, with the help of a Memphis church – New Life Holiness Church of God In Christ.

See, New Life Holiness, which is located on the same street Phillips use to walk – Winchester Road – was the one place Phillips says she had to turn to.

“I’ve been abused.. beat up ..raped. I had nowhere to go. The only place that had their doors open was [New Life Holiness],” explained Phillips to WREG Memphis.

According the Rev. Fredrick Smith, it wasn’t easy but they kept their church open to Phillips, and she kept coming back until one day she decided to change.

“Jackie would come here ..curse us out ..curse the children out,” says Smith while explaining that to them, Phillips was, in their beliefs, “somebody’s daughter” and/or “somebody’s mother.”

According to Phillips, that gave her “hope.”

The church celebrated Jacqueline’s new-found sobriety and new outlook on life in a special service on this past Sunday.

Although Phillips hasn’t been to a formal rehab, she’s counting on her new-found relationship with God to help her make it through the rough times ahead during her healing, as she heads to North Carolina to live with her mother.