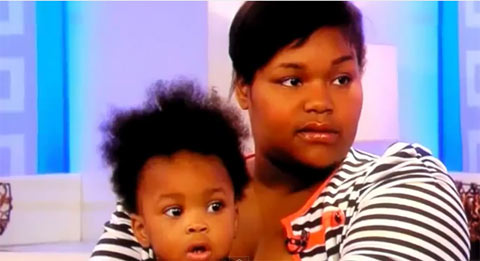 Sakia David, 22, the New Jersey mother of the 1 year-old boy, Saimeir, who was placed in the washing machine in the video that went viral is furious. According to David, the sitter Sandra is the girlfriend of her son’s father who is incarcerated and had been watching her son that day.

David who went on NBC’s Today Show, stated that she didn’t know the man that placed her son in the washing machine and Sandra (the sitter) didn’t mention the incident when she had got home from work on May 11th.

According to David, she recognized her son in the video and it wasn’t actually confirmed until police came knocking at her door.

When Sakia David confronted Sandra about the incident, of course she denied it was her. And for the bumps that little Saimeir acquired, Sandra told David that he fell down some steps, 2 to be exact.

In the video, as reported on MemphisRap.com, the man who was believed to had been the child’s father placed the little boy playfully in the washing machine not knowing that it would lock and turn on after closing the door. Sandra and the man can be seen panicking in the video looking for help. Luckily, a calm but quick Kong Enh, an employee at the laundromat, killed the power and freed the little boy who had a few spins in the machine with minor injuries.

According to reports, the prosecutor’s office decided not to press charges against the sitter and her acquaintance . A spokesman for the office is cited as stating that it wasn’t an intelligent choice, but it wasn’t a crime.

“…. she sat there and watched him put my baby in the washer,” stated David.

Sakia David blames both Sandra and her acquaintance for the incident and plans to press charges.